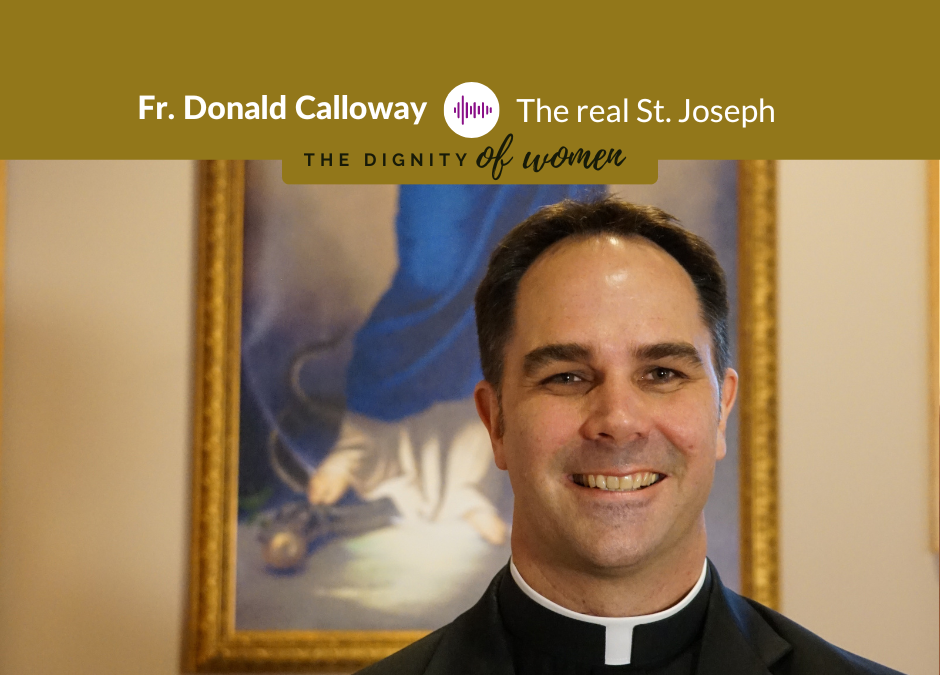 Fr. Donald Calloway is a Catholic priest, often known as the “surfer priest”, with a radical conversation through Our Lady joins me on this episode of The Dignity of Women to explain how a high school dropout and juvenile delinquent becomes the prolific defender of Mary and her spouse Joseph.

Fr. Donald Calloway is a convert to Catholicism and a member of the Congregation of Marian Fathers of the Immaculate Conception (MIC). Before his conversion to Catholicism, he was a high school dropout who had been kicked out of a foreign country, institutionalized twice, and thrown in jail multiple times.

After his radical conversion, he earned a B.A. in Philosophy and Theology from the Franciscan University of Steubenville, M.Div. and S.T.B. degrees from the Dominican House of Studies in Washington, DC, and an S.T.L. in Mariology from the International Marian Research Institute in Dayton, Ohio.

“Today we have a real crisis in manhood. Men don’t know what it means to be men and they’ve kind of been emasculated by the culture. They don’t know how to be heads of a family, how to be leaders, how to be strong and yet tender. I think that St. Joseph is going to be a perfect model for that – for men. I really think that this upcoming book: Consecration to St. Joseph is going to really help individuals, families, and society at large, because when we bring St. Joseph onto the battle field we’re going to get the restoration of order. That is what a father does – in a household, when there’s chaos, when there’s confusion, the father is the one who brings order to things, so we need St. Joseph right now.”

Mother Angelica said of St. Joseph – “Old men don’t walk to Egypt,” and I think she’s right! There is nothing in scripture to shows us that Joseph was anything other than strong, faithful, loving, and obedient. He was a carpenter and would have been physically strong from that trade. Joseph was chosen by God to fulfill a supremely important role and he was obedient each time the angel visited him. Joseph walked from Nazareth to Bethlehem, Bethlehem to Egypt, and back to Nazareth again. He sought to provide a place for Mary to have shelter and rest when she was to give birth to Jesus after their long journey. Joseph and his wife presented their son to the priest Simeon in the temple, and Joseph also received the painful prophesy concerning Mary – at her side. The two searched for Jesus together when he was lost as a 12-year-old boy after the feast of the Passover. The hidden 30 years of Jesus’ life on earth were spent almost entirely in family life with Mary and Joseph.