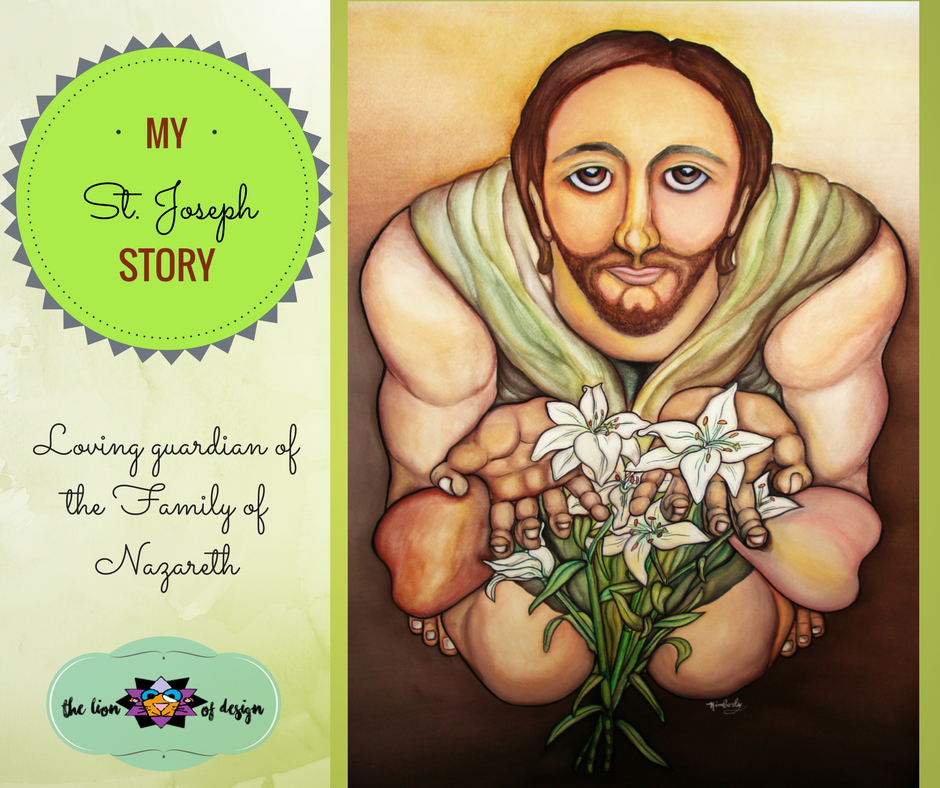 St. Joseph the Giver – Painting I did for my husband

In honor of the great feast of St. Joseph, beloved foster father of Jesus, I decided to share my miraculous story of this holy man’s intercession. Here is My St. Joseph Story.

A few years prior to meeting my husband, I considered a vocation to The Sisters of Life. At that time, the Sisters had been given a very generous portion of land to build a retreat house – on the picturesque countryside of Stamford, Conn. They wasted no time with this gift, establishing a camp on the grounds and putting out a call for help from any volunteers who were willing to come re-build a condemned church on the property. The Franciscan invitation to “Rebuild my Church” was a calling that resonated in my heart, and one I couldn’t refuse.

I was working as a campus minister in DC at the time. I found that I had a strong and growing devotion to the Blessed Mother, usually devoting the whole month of May to meditate upon her role in the life of Jesus. It had struck me however, that particular May, that I did not really have any relationship with her spouse, St. Joseph. Surely I respected him greatly as the father of Christ on earth and the spouse and protector of Mary. His many yeses to God and his gentle saintly nature never made me question his goodness…but I just didn’t know him like I thought I should.

Deciding that I should devote a month that summer to St. Joseph exclusively, yet not knowing where to start in establishing such a relationship with the heavenly patron, I lifted up a prayer to the Holy Spirit. I would leave it in his capable hands to give me guidance.

As I went about my tasks on campus, I bent down to pick up a book that had fallen off the bookshelf at my feet. Out fell a folded piece of paper. Chills ran up and down my spine as I caught a glimpse of the image of St. Joseph on the front of the small page in my hand. To my amazement, the paper contained a Thirty Day Prayer to St. Joseph, one in which I didn’t even know existed. The Holy Spirit had sure worked quickly on this one!

Tucking the prayer in a safe place, I planned to dedicate the month of June to St. Joseph the worker – using those thirty days to ask for illumination on the nature of this saint. At the same time, I contacted the Sisters and told them I would be packing up my car and driving out to Connecticut to help rebuild the church!

I excitedly began the 30-day prayer on the day before I left for Connecticut, knowing it had been hand selected for me by the Holy Spirit. Something big was surely going to happen. As I packed my bags, I continued reminding myself that the only precious item that really mattered in packing was that prayer.

Stopping for one night at my parents house along the way, I could NOT believe that the prayer was nowhere to be found. Frustration gave way to relief as I realized it was at least missing while I still had internet access and could easily track it down and print it out. For hours I scoured the internet, reading through hundreds of St. Joseph prayers, yet none where the one that had fallen out of that book. In disbelief, I printed out a different St. Joseph prayer and went to bed.

The next day, I hopped into my car and made my way to the surprisingly rural and beautiful part of Connecticut where the Sisters were preparing their retreat site. As I pulled up the long drive of the camp, I saw many tents set up and people scattered busily around the grounds. I was immediately greeted by a joyful Sister in a blue and white habit, saying, “Welcome to Camp St. Joseph!” Her greeting struck me as the first confirmation that I was in the right place. Perhaps this holy country solace would help me in tracking down the details of this mysterious man who raised Jesus.

The Sister went on to tell me that after some prayer they had decided to dedicate the camp to St. Joseph the worker. Not only that, but along with the dedication they had decided to begin a thirty day prayer to him only two days prior (when I began mine). I looked at her funny for a moment and then my face softened as I gave a little chuckle, telling her I had also started a novena to St. Joseph, yet sure it could not be the same one. With a firm confirmation she assured me that it could not be the same prayer they were using, as theirs was a very rare version. With that I told her that there must be several very rare versions, explaining how I had searched in vain to find my version at my parent’s house.

Later that evening, after I had settled in and the volunteers gathered together for dinner, the Sisters passed a basket of prayers around. As I reached my hand in and pulled out the same small paper adorned with St. Joseph that I had lost only the day before, my eyes became as big as saucers. Looking across the room, my shocked countenance met the stare of the Sister I had been greeted earlier that day. She seemed to be silently taking the whole miraculous event in and she just smiled back at me, shaking her head in amazement.

Later that night, as I lay in my bed, I reflected on the way St. Joseph was already making himself known to me. First, the Holy Spirit had allowed this special prayer to fall out of a random book on the same day I asked for a St. Joseph prayer. Then, in allowing me to lose it,  I was able to see just how rare a treasure it had been. Finally, leading me to Camp St. Joseph, the same prayer was put right back into my hand!

I cannot tell you fully how much I enjoyed those two weeks with the Sisters of Life and the good-hearted volunteers who came to help. We worked, we laughed, we prayed, and we sang! There were pranks, good meals together, a church that got built from the ground up, and there were those of us who got to experience the Lord’s presence in its walls for the first time.

During my journey of those thirty days of prayer through the intercession of St. Joseph, I came to learn in a small way who St. Joseph really was. This included who he was to Mary, to Jesus, and to me. For the first time I had taken the time to understand why God had intentionally chosen him for the great purpose and role he served – just as God had chosen holy prophets for ages before him.

The Holy Spirit blessed my quest for the real St. Joseph, and it went far beyond the silent statue of a pleasant man holding lilies at the front of the church.

As for the thirty day prayer – my prayers were not only answered in greater amounts than I could have asked, but the prayer has been passed along and brought many blessings to others as well.

Through that prayer, a beautiful relationship with St. Joseph blossomed in my heart. As well, my vocation was slowly revealed. I understood that I was not being called to a life as a religious sister, but rather called to a man with the same unique qualities I found manifest in St. Joseph. I asked the Lord that when my own St. Joseph came about, he would give me lilies as well (which he did, the first time he gave me flowers!)

Thirty Days’ Prayer to St. Joseph
In honor of the 30 years he spent with Jesus and Mary

Ever blessed and glorious Joseph, kind and loving Father, and helpful friend of all in sorrow! You are the good father and protector of orphans, the defender of the defenseless, the patron of those in need and sorrow. Look kindly on my request. My sins have drawn down on me the just displeasure of my God, and so I am surrounded with unhappiness. To you, loving guardian of the Family of Nazareth, do I go for help and protection.

Listen, then, I beg you, with fatherly concern, to my earnest prayers, and obtain for me the favor I ask.

I ask it by the infinite mercy of the eternal Son of God, which moved Him to take our nature and to be born into this world of sorrow.

I ask it by the weariness and suffering you endured when you found no shelter at the inn of Bethlehem for the holy Virgin, nor a place where the Son of God could be born. Then, being everywhere refused, you had to allow the Queen of Heaven to give birth to the world’s Redeemer in a cave.

I ask it by the loveliness and power of that sacred Name, Jesus, which you conferred on the adorable Infant.

I ask it by that painful torture you felt at the prophecy of holy Simeon, which declared the Child Jesus and His holy Mother future victims of our sins and of their great love for us.

I ask it through your sorrow and pain of soul when the angel declared to you that the life of the Child Jesus was sought by His enemies. From their evil plan you had to flee with Him and His Blessed Mother into Egypt. I ask it by all the suffering, weariness, and labors of that long and dangerous journey.

I ask it by all your care to protect the Sacred Child and His Immaculate Mother during your second journey, when you were ordered to return to your own country. I ask it by your peaceful life in Nazareth where you met with so many joys and sorrows.

I ask it by your great distress when the adorable Child was lost to you and His Mother for three days. I ask it by your joy at finding Him in the Temple, and by the comfort you found at Nazareth, while living in the company of the Child Jesus. I ask it by the wonderful submission He showed in His obedience to you.

I ask it by the perfect love and conformity you showed in accepting the Divine order to depart from this life, and from the company of Jesus and Mary. I ask it by the joy which filled your soul, when the Redeemer of the world, triumphant over death and hell, entered into the possession of His kingdom and led you into it with special honors.

I ask it through Mary’s glorious Assumption, and through that endless happiness you have with her in the presence of God.

O good father! I beg you, by all your sufferings, sorrows and joys, to hear me and obtain for me what I ask. (Here name your petitions or think of them.)

Obtain for all those who have asked my prayers everything that is useful to them in the plan of God. Finally, my dear patron and father, be with me and all who are dear to me in our last moments, that we may eternally sing the praises of

“A blameless life, St. Joseph, May we lead, By your kind patronage From danger freed.”