Devotion to the Blessed Mother Mary 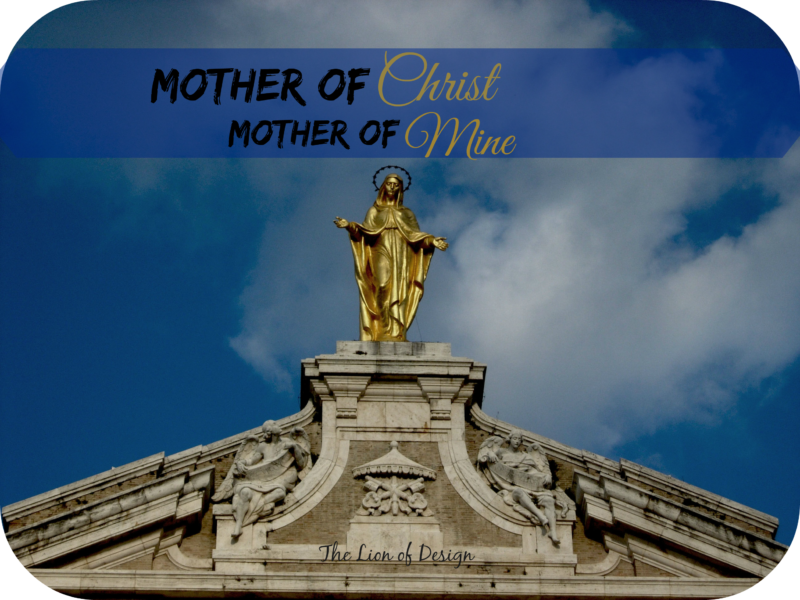 I find it hard to put my devotion to the Blessed Mother into words, especially for those who simply don’t understand. It’s almost as if there exists such a sacred relationship with her, that broaching the subject with those looking to condemn, would be too heartbreaking.

What is it about this mysterious woman?

“Okay, so she was the mother of Jesus, I get it. She was chosen for a specific purpose and did her job. So, move on!”

Um, back that train up!  Are you hearing yourself?  She was the mother of God. “The MOTHER of GOD!” Let’s think about that for a minute, and allow it to properly blow our minds.

Mary, the Mother of God, carried Jesus Christ in her womb for nine months! Her womb of flesh and blood became a living tabernacle for the most high; the dwelling place of the very Divine presence. Now, I know many of us who have had the blessing of carrying another human being in our bodies, have had the supernatural experience of higher purpose. We were participating in the divine act of bringing another human being into the world, and a soul into eternity!

We know from the Old Testament, that the tabernacle was filled with “The glory of the Lord,” and accompanied the Jews to the promised land (Ex 40:34-35). The Levites were made priests and appointed over the tabernacle, and only they could draw near to it. Anyone else who came near the tabernacle was put to death (Num 1:51).

The tabernacle was said to be overshadowed by a cloud, which was the Holy Spirit. Hmm, where have we heard of this overshadowing by the Holy Spirit in the New Testament? Unsurprisingly, it was said by an angel, to the woman who would be the mother of God.

The Holy Spirit will come upon you, and the power of the Most High will overshadow you; therefore the child to be born will be called holy, the Son of God. ~Lk 1:35

Mary experienced the same beautiful gift of carrying a child that many mothers enjoy, but it was infinitely magnified, because Mary was carrying Christ the redeemer. We know from Isaiah that sin separates us from God:

Behold, the Lord’s hand is not shortened, that it cannot save, or his ear dull, that it cannot hear; but your iniquities have made a separation between you and your God, and your sins have hid his face from you so that he does not hear. ~Is 59:1-2

The blessings of Mary and her husband Joseph, in the life of the family, were unending however. Her motherhood was certainly not a singular utilitarian act, in which after birthing him, he sets out on his own in the world, like some sci-fi movie. No! Mary and Joseph were not only the very first to greet him into his earthly life, but also the first to know his true nature (true man and true God). An often overlooked fact, is that of his human nature; genetically born of Mary, and therefore receiving only her genetic makeup. Imagine the similarities! She nursed him, comforted him, taught and cared for him.

The Holy Family was consistently guided by messages from angels. Mary’s annunciation by the angel Gabriel, Joseph’s reassurance in entering into matrimony (Mt 1:20), Joseph’s instruction to flee to Egypt (Mt 2:13), and then safely return to Israel (Mt 2:19-20).

Mary walked beside Jesus during every last one of his years on earth, and she knew him more intimately than any other human being. We often admire the disciples who knew Jesus during his public ministry of three years, imagining the wealth of information they received from him, even beyond what was recorded.

But there are also many other things which Jesus did; were every one of them to be written, I suppose that the world itself could not contain the books that would be written ~Jn 21:25.

If John could say this about three years, imagine what Mary could have written about thirty-three!

John’s Gospel is written as a parallel of the Creation account in Genesis. In his record of the Wedding Feast at Cana, Jesus uses a common Hebrew figure of speech, in answering his mother regarding the wine that has “failed.“.

Ouch, right? This seems like a major dig. But, is it really likely that the Jesus we know would say something to the effect of; “I know Mom, get off my back?” No way.

Again, the translation is lost in the English vernacular. In fact, the phrase Jesus used is used several times throughout the bible, and can more appropriately be understood as “What do you wish?” (Josh 15:18). Remember, this is the same Jesus who was obedient to his parents, in returning with them to Nazareth, when they found him teaching in the temple (Luke 2:51). His mother did not just brush this incident off, in fact, scripture makes a point of telling us that “His mother kept all these things in her heart.”

Do Whatever He Tells You

I believe that the one woman who intimately shared the earthly life of the Savior, given full knowledge of his divinity, was also fully aware of Jesus’ capabilities (although still in awe, as are we all, in the midst of his divinity). After all, did Simeon not say to Mary and Joseph in the temple:

Behold, this child is set for the fall and rising of many in Israel, and for a sign that is spoken against (and a sword will pierce through your own soul also), that thoughts out of many hearts may be revealed. ~Lk 2:34-35

Oh, make no mistake about it! Mary knew that once her son’s public ministry began, she would suffer right beside him. Still, one of Mary’s few recorded statements in scripture; “Do whatever he tells you,” is perhaps one of the most exemplary and powerful.

Mary is submissive to the will of her son, and in return he always honors her. What is said between them at Cana is a pivotal moment in their relationship. His mother acknowledges and gives blessing upon the preceding of his public ministry, all the while preparing her own soul to suffer alongside his. Jesus will not endure his ministry, suffering, and persecution alone. As was prophesied by Simeon, Mary’s soul will also be pierced.

As soon as his mother says to the servants, “Do whatever he tells you,” Jesus immediately performs his first miracle; turning water into wine. It is written that after this sign, in which Jesus manifested his glory, “His disciples believed in him.” But there was an earlier disciple who needed no convincing to believe in him (and not in the way our moms believe in us). She traveled with him to Capernaum, and so it began.