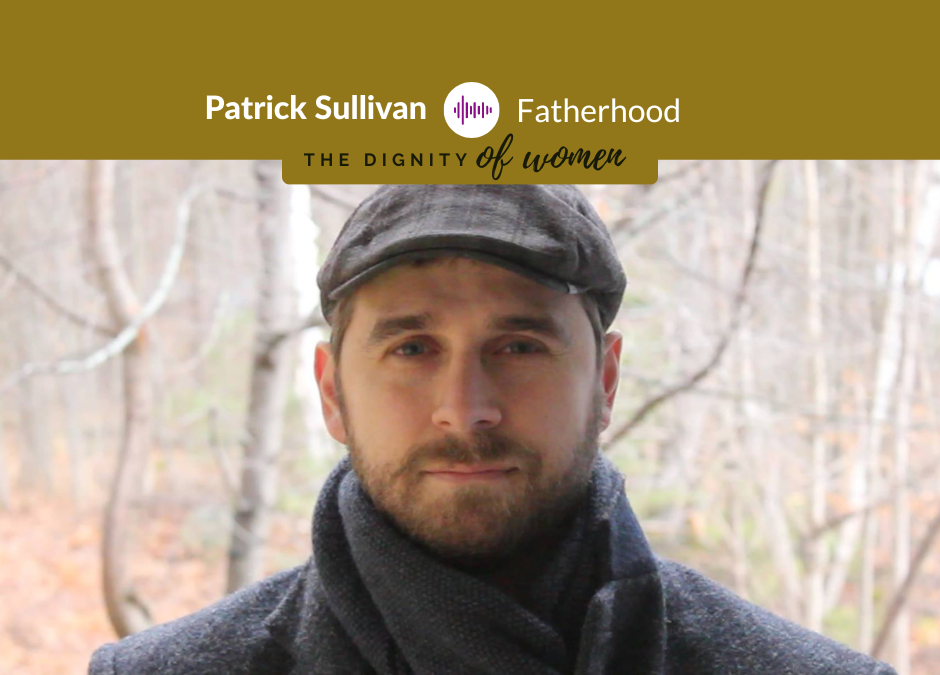 Patrick Sullivan, Catholic evangelist, was raised by a single mother in rough neighborhoods of Canada. He grew up with poor examples of father figures throughout his childhood and teens. It wasn’t until a miraculous experience that Patrick turned to God and the Catholic Church. There he found the example of fatherhood he had longed for in the Catholic priesthood.

He joins me on this episode of The Dignity of Women to share how he learned to fully live his fatherhood through the scriptures, and how he works with others to create a household rooted in peace.

Patrick Sullivan is a Catholic evangelist, author, educator, public speaker, and founder of Evango, a Catholic media organization based out of Canada.

He lives in Barry’s Bay, Ontario with his lovely wife and their 8 children and travels across North America leading parish missions.

Patrick certainly isn’t the guy you would have expected to get Godly parenting advice from if you would have known him growing up. He grew up fighting, was hurt by the men in his life, and became angry as a teen. Especially when a relationship he really cared about ended due to her increase in her Catholic faith.

An encounter with the Lord really shook him to his core and left Patrick wondering for years to come, what God was asking of him. One thing he knew was that he “wanted to try harder.” God granted him that opportunity. Patrick began to study theology and find in the priests he encountered a true example of manhood and fatherhood.

As Patrick and his wife began to grow their own family, they were determined to create a household of peace rather than allowing the chaos to wear them down and steal their joy. They worked tirelessly with other parents whom they admired, took the best of all they gathered, and tested them out in the home and the classroom.

Years of searching and applying, with constant reliance on scripture, led them to develop a program they can share with others called Me & My House.

Me & My House is a practical game plan for Catholic parents who are struggling with all the things that parents struggle with. It challenges you to do little things. To make little changes that will make a huge impact on your family.

In this Catholic Parenting Program, you will discover the foundations that can strengthen your motherhood and fatherhood. You will learn the habits that can make parenting easier, and the habits that you absolutely want to avoid. In fact, it gets so practical that it discusses discipline and how to set boundaries, so that by the end of the program you will have a very clear sense of how you want to build your unique family culture with the children God has given you.

The example Patrick did have growing up was his mom. He saw her as holding her children in one arm and holding out the darkness of the world with the other. Her example certainly helped to form his image of motherhood and the beauty and greatness of The Blessed Mother. Patrick shares the message he hopes his daughters learn from him with every woman listening, and speaks to the heart of women who may not have heard this message from father figures in their own lives.