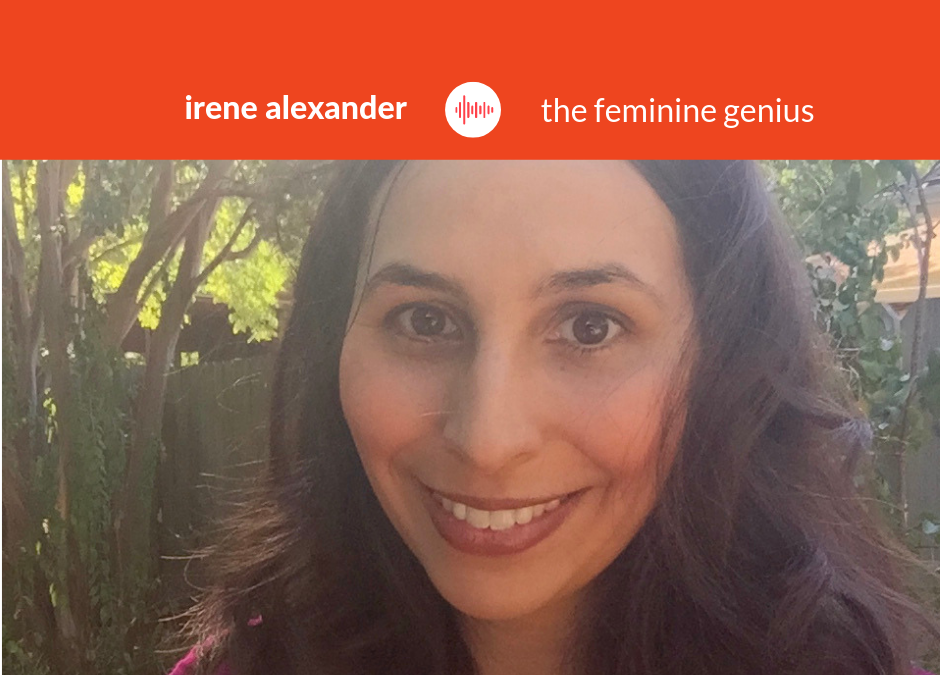 The “feminine genius” is a term that was advanced by St. John Paul II during his papacy, and has challenged and encouraged both women and men in the Church since then. But what exactly “is” the feminine genius and how do women fully live this out, in order to find that happiness that brings her communion with God through her unique created nature.  Irene Alexander joins me on this episode of The Dignity of Women to unpack the teachings and richness of the theology of the feminine genius.

As a professor with 5 young children, Irene shares her own discovery of what St. John Paul II titled “the feminine genius,” and how she lives that out in her daily life.

A woman, in her nature has certain gifts and qualities that are feminine. Through her receptivity in both physical nature and soul, she is able to make room for others. This feminine genius also includes an intuitive quality that allows others to entrust a richness of thoughts and concerns on the heart with women, who are naturally empathetic in a mysterious way. God entrusts the human person to women in a very unique way, and this is a gift. Women also possess a generosity that has the quality of being very self-less. John Paul II draws a lot on the ideas of St. Edith Stein, who said that women are interested in the personal. Often she is interested in abstract principles in light of the personal, and the deeper concern and awareness of others.

One of the great feminine gifts is magnetism, and even in her soul she send signals that can attract and draw others into her joy and feel comfort in her presence. This cultivation of intimacy is beautifully lived and fulfilled in marriage, single life, and religious life. Women, in a unique way want to be cherished, adored, and to know the deeper meaning of love.

Alice von Hildebrand rightly states that “women are unashamed of their tears,” because they are moved profoundly and are able to enter in a deep and empathetic way into another person’s heart. This is often looked upon by society as a weakness, but given that loneliness is the new poverty, this sensitivity and empathy toward the other person is a great and needed strength.

Woman’s uniqueness satisfies her through sharing her gifts in the family, as well as outside the family and with society. John Paul II talked about the equality and the difference that is complementary between women and men. When Adam first beheld Eve, he says “At last!” about one made like him. St. John Chrysostom gives the imagery of Eve as not being made from his head so as to Lord over him, or from his foot so as to be Lorded over by him, but rather from his side (right near his own heart.)

The man is called to lay down his life for his wife. Masculinity has a proper aggressiveness that is not necessarily violence. The masculine heart will spend himself entirely for the sake of his beloved.

The serpent implants a doubt in Eve, challenging the nature of God. Eve initially corrects the serpent on God’s goodness, but plants the seed of doubt that God is holding out on her. There is something slightly true about his lie, which makes it so powerful. Though they are in a paradise, they are not yet beholding the beatific vision. Satan says that if she wants that fullness, she needs to take it. Adam is complicit in the sin, for he is with her. This desire to be like God is part of the original plan, to be with Him. This is at the root of all human sin, but in a specific way the woman feels called to do things her own way in order to find happiness – re-create the whole order of things in order to find happiness. Embracing this nature, as Mary did in undoing Eve’s sin is the redemption of Eve and the rediscovery of God’s love for woman. The more we follow His plan, the more we find our own hearts fulfilled. Mary was filled with a confidence and courage, rather than a fear and cowardice.

“Prudently and generously” are the words used in discernment of welcoming new life into the family, or abstaining for a certain or indefinite period of time. Modern living situations are far more isolated and a lot of the stress now falls on the mother, who no longer has the help and support of living situations in the past and in other cultures.

Physical and psychological health require a sensitivity, but discernment only requires focusing on “right now,” and not necessarily down the road. Discernment is constantly bringing a concern or decision before the Lord. We have to remember to be prudently and generously making fertility decisions, to use the natural family planning tools that are at our disposal in the Church, and not to put undue pressure on ourselves to make definitive decisions for the future. “God, what do you want for our family?”

Paul noted to the Corinthians that it is tempting as Christians to see ourselves as exactly the same. There are many struggles, both physical and moral, that create particular discernment for each family.