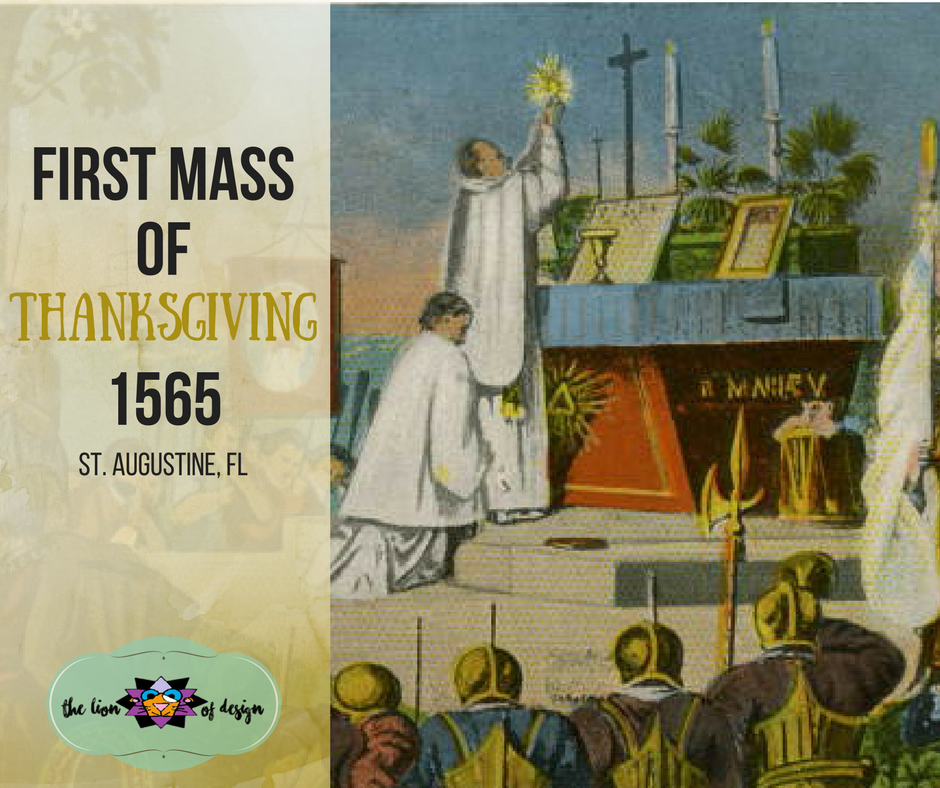 Lest we forget… 55 years before the Pilgrims landed on Plymouth Rock, there was a greater Thanksgiving being celebrated in St. Augustine, Florida. This Eucharist “thanksgiving,” was the holy sacrifice of the Mass.

Mass at St. Augustine, Fl has been celebrated for over 450 years! Now the site of a Cathedral Basilica, St. Augustine is the oldest Catholic parish in the United States.

Long before the Mayflower set sail from England (1620), French and Spanish explorers had been establishing forts in Florida. Don Pedro Menéndez de Aviles was an admiral and explorer from Spain. He planned regular trans-oceanic convoys, and was commissioned by King Philip II of Spain to conquer Florida. This included seizing the French Huguenot’s Fort Caroline, as the Huguenot’s were considered to be dangerous heretics.

Menéndez’s son Juan had been shipwrecked near Florida in 1561, and his father desired to search for him there. In 1565, Menéndez was finally given permission by the King to return to Florida. On August 28, 1565, the feast of St. Augustine of Hippo, Menéndez and his crew saw land. They landed and named the settlement San Agustín.

With Menéndez were four priests, who came on the voyage to minister to the Spaniards settling in Florida. This was the site of the first Catholic Mass in the United States, and through the efforts of the early Spanish priests, St. Augustine became the headquarters of the Catholic Church’s efforts to minister to the Native Americans living in the surrounding areas. From this headquarters, two lines of Franciscan missions extended outward to neighboring states.

The featured picture is “an exact reproduction of the famous painting which hung on the walls of the Old Cathedral, on the Plaza, and which was destroyed in the fire of 1887.” The Mass, being celebrated on an outside altar, is attended by natives as well as Spaniards. It is greatly symbolic of the unifying effect of Jesus Christ, through his Church, for all people!

The elevation of the consecrated host, which is the central focus of the painting, is also central to the Catholic liturgy. The word Eucharist literally means Thanksgiving. The Eucharist is truly the highest form of Thanksgiving, as it is the body and blood, soul and divinity of Jesus Christ our Lord – hidden in a small, white host.

The term Eucharist was used for the rite of Communion as early as the Didache (late 1st/early 2nd century). It was also used by St. Ignatius of Antioch (35-107) and St. Justin Martyr (100-165) in describing the Mass.

For all time, the Eucharist will remain the highest form of Thanksgiving. We thank God for our life, which he breathed into us – creating all things out of nothing. We thank God for Jesus Christ; his son, who came in the form of a man and died on the cross, for the sins of all men. We thank God for the Holy Spirit; the Paraclete, who Jesus promises will come to his Church and remain with us forever.

Freedom from oppression of any kind, especially religious freedom, has been sought throughout humanity – even at the risk of peril and death. When the Pilgrims first spotted land in 1620, they prayed Psalm 100 (99), in Thanksgiving to God. Their decision to settle in the new land was born of their desire to practice their religious beliefs – free of the restrictions of the Church of England, and at the same time, to preserve their English cultural identity.

As “Separatists” from the Church of England, the Pilgrim cause was met with greater sympathy than that of Catholics. As Archbishop Matthew Hutton wrote of the Pilgrims in 1604:

The Puritans though they differ in Ceremonies and accidentes, yet they agree with us in substance of religion, and I thinke all or the moste parte of them love his Majestie, and the presente state, and I hope will yield to conformitie. But the Papistes are opposite and contrarie in very many substantiall pointes of religion, and cannot but wishe the Popes authoritie and popish religion to be established.

Yet, when Hutton died in 1606, his replacement sought to purge England of all Catholics, Puritans, and Separatists alike. After many hefty fines for not attending Anglican services, the Separatists fled to Amsterdam and Holland for a time. In 1619 they were granted a conditional land patent by the King of England, and made plans to seek freedom across the sea.

On October 3, 1789, President George Washington issued a Proclamation – assigning Thursday, November 26 as a day of Thanksgiving to God. Imagine, the President of the Country calling to unify all persons in the country through prayer. Asking that included in that prayer should be the begging of pardon from God for our national transgressions. Praying together that our Government will remain wise and just. Asking God to bless, protect, and guide other nations as well. That all knowledge, religion, virtue be always under the guidance of the Almighty. And in humility, the President concludes by recognizing the temporal state of prosperity, and finally entrusting all things to God.

By the President of the United States of America. a Proclamation.

Whereas it is the duty of all Nations to acknowledge the providence of Almighty God, to obey his will, to be grateful for his benefits, and humbly to implore his protection and favor—and whereas both Houses of Congress have by their joint Committee requested me “to recommend to the People of the United States a day of public thanksgiving and prayer to be observed by acknowledging with grateful hearts the many signal favors of Almighty God especially by affording them an opportunity peaceably to establish a form of government for their safety and happiness.”

Now therefore I do recommend and assign Thursday the 26th day of November next to be devoted by the People of these States to the service of that great and glorious Being, who is the beneficent Author of all the good that was, that is, or that will be—That we may then all unite in rendering unto him our sincere and humble thanks—for his kind care and protection of the People of this Country previous to their becoming a Nation—for the signal and manifold mercies, and the favorable interpositions of his Providence which we experienced in the course and conclusion of the late war—for the great degree of tranquillity, union, and plenty, which we have since enjoyed—for the peaceable and rational manner, in which we have been enabled to establish constitutions of government for our safety and happiness, and particularly the national One now lately instituted—for the civil and religious liberty with which we are blessed; and the means we have of acquiring and diffusing useful knowledge; and in general for all the great and various favors which he hath been pleased to confer upon us.

and also that we may then unite in most humbly offering our prayers and supplications to the great Lord and Ruler of Nations and beseech him to pardon our national and other transgressions—to enable us all, whether in public or private stations, to perform our several and relative duties properly and punctually—to render our national government a blessing to all the people, by constantly being a Government of wise, just, and constitutional laws, discreetly and faithfully executed and obeyed—to protect and guide all Sovereigns and Nations (especially such as have shewn kindness unto us) and to bless them with good government, peace, and concord—To promote the knowledge and practice of true religion and virtue, and the encrease of science among them and us—and generally to grant unto all Mankind such a degree of temporal prosperity as he alone knows to be best.

Given under my hand at the City of New-York the third day of October in the year of our Lord 1789.

Have an Intentional Advent the Year:

Get Your Catholic Mom Bundle