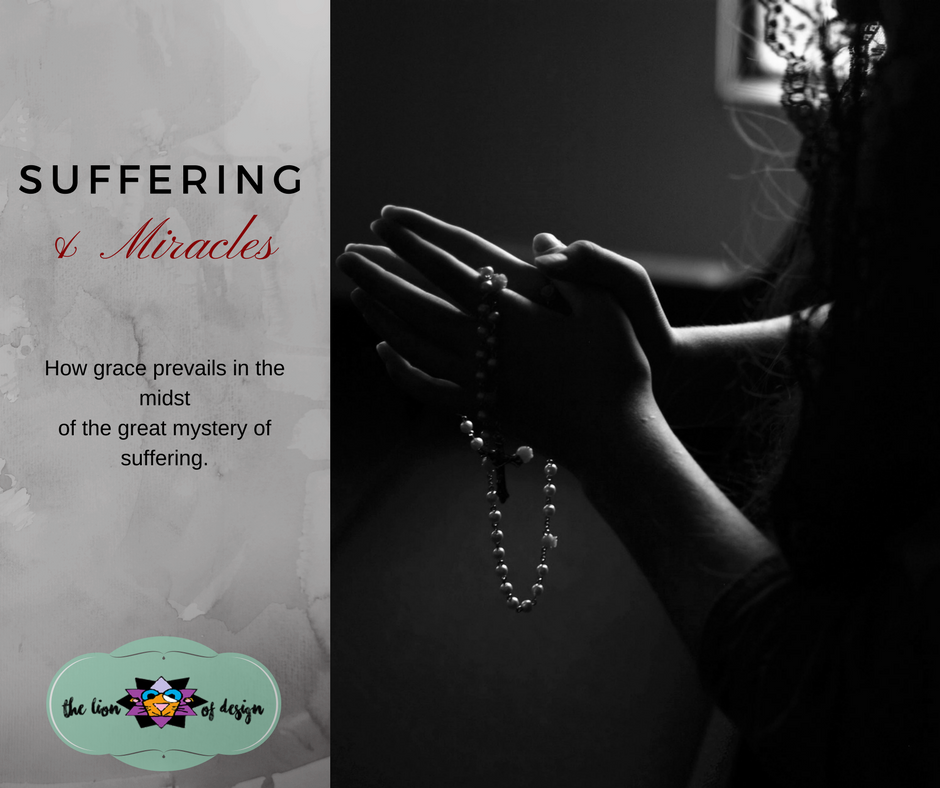 I am writing to you on the feast of the most beloved St. Joseph! What a wonderful day to celebrate the role of fatherhood and the St. Josephs in our own lives. Here you can read my personal encounter with the foster father of Jesus, and how that encounter influenced the rest of my vocation journey.

Last month I shared with you a bit about my gallbladder surgery, and mentioned that I had some incredible intercessions from heavenly friends, which were so encouraging and humbling along the way. I would love to share with you a little bit about just how God revealed himself in the midst of my illness.

First of all, I would like to say that for those of you struggling with chronic illness, or caring for someone who has chronic illness, I have such a deep respect and admiration for you – particularly when you are able to suffer with a smile and good disposition. It is NOT easy!

Since December, I have had pneumonia, gallbladder attacks, surgery, and then digestive complications in the months after surgery. I suffered fatigue, excessive weight loss, anxiety, and of course – spiritual attacks and the lure of depression and self-pity.

Plainly speaking, in just a few short months, I fell apart. All this to say that it is hard to imagine how individuals find the strength to cope with long-term debilitating illness, especially when the complications so often effect daily function.

In my absolute weakness and frailty, I did the only thing that I really know how to do – cry out to Jesus! I turned to him often in prayer throughout the day, and I leaned upon the words of scripture, the saints, and the wisdom of friends and family. My spiritual director heard from me often, and just as often had to sort out what I was saying through my tears.

The Saints Come Marching In

As a Catholic, I am thankful to have been introduced to so many holy heavenly friends, who will often pray for me when asked – and boy are their prayers powerful! My “dream team,” if you will, for this particular stretch of suffering, was St. Maria Goretti, St. Padre Pio, and Irene Fedoryka (an inspiration mother). I find myself often turning to these friends, who have journeyed with me over the years.

As with deeply devoted friends on earth, these heavenly friends surround me from above with their faithful prayers, and so, walk with me through my struggle or hardship. At times, they even reveal themselves in little ways.

Padre Pio was the first to do so. My gallbladder surgery was scheduled for early February with a highly recommended surgeon. However, as the days of  January slowly began to creep by, and my symptoms become worse, I feared I wouldn’t make it that long. One evening, symptoms became so bad that I called the ‘on-call’ surgeon – a female surgeon who repeated her last name for me several times over the phone.

After a brief conversation, she concluded that I needed to get into surgery as soon as possible, and she elected to do the surgery herself. Thankfully, the following day, surgery was scheduled for January 19th, and the countdown began.

I should say, at this point, that I prayed fervently for trust in the Lord; for the day and the time and the surgeon he chose for me. That regardless of the circumstances, all would be as it was meant to be. I surrendered control – of the highly recommended surgeon and the specific date we had chosen

As I filled out the extensive online pre-surgery forms, my surgeon’s name was nowhere to be found in the drop-down menus. Confused, I began searching for information on her, finding that she used two last names (the one listed was not the one she gave me.) Knowing much about the Italian man named Francesco Forgione, who later become Padre Pio, I laughed out loud when I discovered my surgeon’s name was ‘Forgione’ (more on that to come)!

Irene Fedoryka is a woman I have only known through heavenly intercession. The first such encounter happened to be on her birthday, a few years ago. This coincidence, as it seemed, was confirmed by one of Irene’s daughters, to be a day often filled with supernatural graces for the Fedoryka family.

With years having gone by, I had not remembered her birthday. And yet, she had not forgotten me. Had I gotten wheeled into the operating room at 11:00 when I should have, I would not have received the message from Irene’s son. Instead, surgery continued to be postponed for five hours. During which time, I was able to read a lovely email from Irene’s son, who knew nothing about the surgery, but wanted to wish me well on this very special of days – his mom’s birthday!

Perhaps the fact that my new surgeon happened to have the same last name as Padre Pio, and that the surgery got moved to Irene’s birthday are small occurrences, but to me they were gifts from the Lord. They spoke of a God who answers what is prayed in my heart of hearts, who consoles the suffering and hears the cry of the poor. God allowed these small graces, because he knew that I would notice them, and that they would deeply mean something to me – hope!

To continue the part Padre Pio played in the matter – two weeks after surgery I was scheduled for my follow-up appointment with the surgeon. The holy spirit put it strongly on my heart to share with her the intercession of Padre Pio. I searched for a prayer card of his I had tucked away and stuck it in my bag to give to her.

As I waited alone in the medical room, I began to feel silly about giving the surgeon the prayer card. I knew nothing about her religious views, and perhaps I would offend her. As soon as this entered my head, I prayed for the courage more than ever to follow through. The funny thing was how hard it became after that!

The nurse came in countless times to tell me that the surgeon was held up with another patient and that it would be in my best interest to meet with their nurse practitioner instead. Again and again I insisted that I would wait. And boy did I wait (I now know everything there is to know about the medical information on the posters in her office)!

As the nurse finally sent in the nurse practitioner anyway, my prayer changed; that I might even have the opportunity to share my story with the surgeon. Finally, she came flying through the door and offered me a smile. I knew that I was the last patient of the day, and as she quickly checked me I came to know that she had just given a bleak prognosis to the previous patient. Still, I powered through. Perhaps awkwardly and without a good segue, I asked point-blank if she knew who Padre Pio was.

Surprisingly (or not), she was taken aback for a moment and told me that I was only the second person who had ever asked her that question. She knew right away that I was asking because of her last name, and went on to tell me that her parents and grandparents had a devotion to him (nothing about her). Then it was her turn to shock me.

She told me she was actually related to Padre Pio and that her great-grandparents were from the same small town in Italy as he. She was actually born on the day he died. So there it was – I prayed for the intercession of Padre Pio, and he sent me a relative to operate on me!

Suffering as an Offering

I am convinced that suffering is one of the channels that brings us closest to eternity and the divine! Through the valley of the shadow of death, we encounter our absolute lack of control in preserving our own existence in this world, and our complete dependence on God. Only when all control was stripped away from me through this suffering, did I begin to see God truly take over.

Suffering also brings us to a state of humility and an awareness of our need for his undeserved mercy. We can make all the human strides possible in healing ourselves, and for good reason. But in the end, we cannot avoid suffering or death – both will come to us. In such times this can seem fearful and lonely, but in the midst of those times, Jesus is closer than ever.

The sentiment of embracing the time we have been given becomes amplified in moments of physical suffering, and in this way, suffering has a beautiful grace about it. Similar to the liturgy; through it we are constantly redirected to the sacrifice and eternal promise of Christ before us. Like a jarring psalm or gospel reading reminding us to repent from our sinful ways and turn to Christ, we are given yet another “chance.” Each time we recover from illness, we are reminded to embrace the teaching of Christ with new passion and life within us.

As well, our suffering need not be in vain when we unite it to the suffering of Christ. We can do so in offering to carry just a minuscule fragment of the cross he carried. Under the burden of that splinter, our suffering has meaning, and becomes an offering to God for the mercy of others. Our Lord said to St. Faustina:

There is but one price at which souls are bought, and that is suffering united to My suffering on the cross. Pure love understands these words; carnal love will never understand them.”

How do we get this pure love? How do we rise above “carnal love” to understand it? Suffering is a mystery, and we can never fully understand it, but Christ has revealed enough about suffering to know that it is necessary of the human condition, and that through it graces may be attained. We are all to be purified in fire of some sort, whether earthly or eternal.

Christ does not explain in the abstract the reason for suffering, but before all else He says: “Follow me!” Come! Take part through your suffering in this work of saving the world, a salvation achieved through my suffering! Through my cross! Gradually, as the individual takes up his cross, spiritually uniting himself to the cross of Christ, the salvific meaning of suffering is revealed to him. … Faith in sharing in the suffering of Christ brings with it the interior certainty that the suffering person “completes what is lacking in Christ’s afflictions;” the certainty that in the spiritual dimension of the work of Redemption he is serving, like Christ the salvation of his brothers and sisters. Therefore he is carrying out an irreplaceable service.”