How Far Does the Pro-Life Issue Extend? 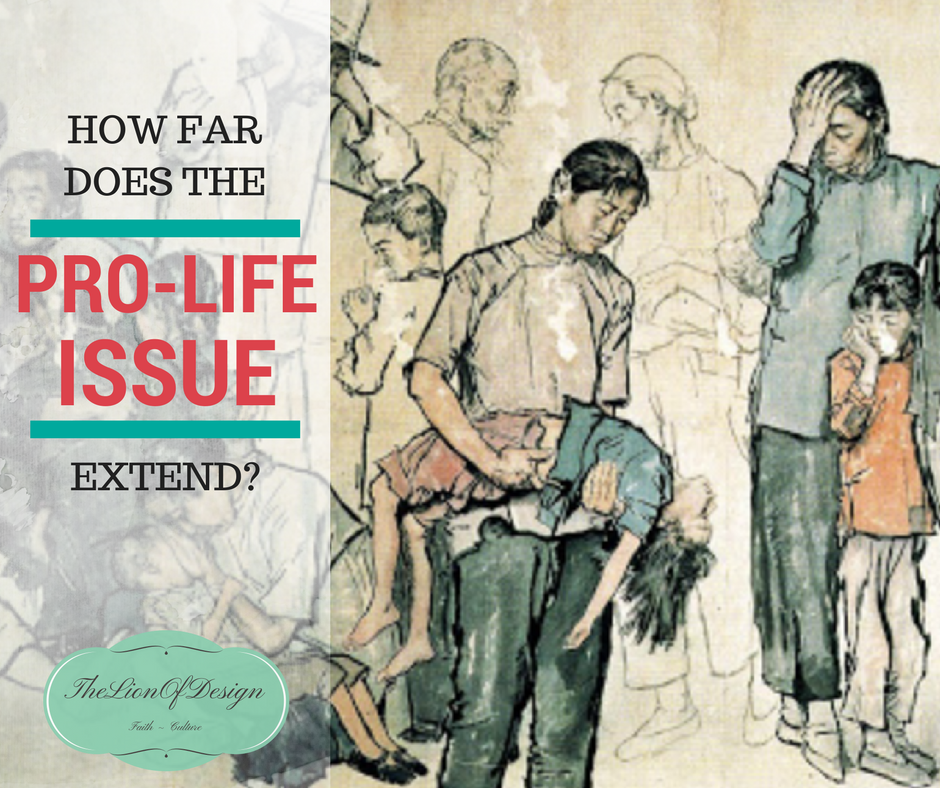 Once again we are living in a time, for better or worse, when we are answerable only to our own conscience. Government and social majority were certainly never intended to be the voice of reason, although the best governing bodies do so through the lens of a clear moral compass. The education system no longer includes the classical foundations of logic, reason, and the beautiful art of rhetoric. Families have largely lost the practice of reading aloud together in the evenings and discussing moral and political topics brought about through the literature read. All of this is a negative reflection on our culture – the lack of formative ability to use reason and the inability to recognize an illogical thought pattern; resulting in hypocrisy and injustice easily disguised as truth.

Human life is always and will always be the greatest moral topic – the life of the body and the life of the soul of the human person is the basis for all other rights and deserves protection above all else. Because we are not created for our utility, the life of the human person is sacred, regardless of our social worth. The greater the innocence of the life lost directly correlates to the moral gravity of the offence. Therefore, the unborn, the sick, handicapped, elderly, victim of holocaust and those suffering intentional deprivation deserve priority in the safeguarding of innocent life.

There are certainly extensions to the care and protection of human life. Because all life is sacred, there is an obligation to respect human life and charitably enhance it whenever possible. This extends to the quality of life of the poor and needy, the rehabilitation of the imprisoned, and the welcoming of the immigrant. Yet, quality of life cannot be placed above the right to life itself. Our primary obligation is first and foremost due those whose innocent lives are in immediate jeopardy. This always includes the lives of the unborn. There are also unfortunate times in our world when it must include the holocaust victim and refugee, especially when their lives are in immediate and grave danger. The safety and right to life of these persons should be prioritized over lesser quality of life situations, excluding deprivations such as starvation, etc.

American history as well as the history of many nations is structured and built upon the promise to safeguard and protect the rights of its own citizens above all else. This is the basic structural fiber of a nation in the first place, and differentiates a nation from a band of anarchists rejecting established social order. Each of the past 5 presidents has affirmed these priorities and instituted orders to limit or ban immigrants and refugees from the country. Reviewing only the last 25 years of American history, here are some of the ways presidents have justified obligation to the citizen above the foreigner. Congressional Research Service: “Executive Authority to Exclude Aliens: In Brief”

Obligation of the Citizen

Those who consider themselves “pro-life” are often criticized for putting their stance for the unborn above all other issues of “life.” Criticism abounds for not doing enough to take care of the “unwanted” child after birth. Insults are hurled for neglecting the death row inmate and the refugee, simply by virtue of having an opinion against abortion. Those opposing ending the life of the child in the womb are accused of putting the life of the child above the life and mental health of the mother.

Yet, once again returning to the logic of the previous points made, innocent life lost is the most morally heinous and objectionable. It holds the highest priority in our defense of all human life and therefore should always begin with the unborn. All other lives, including the lives of the mother, and especially those suffering, abandoned, or wrongfully accused should be respected and attended to following that of the unborn.

In our current social climate, many persons are displaced from their countries of origin, by no choice of their own, and remain at the mercy of foreigners to give them aid. Our own nation has contributed in many ways to the disturbance and turmoil leading to their displacement, and we certainly have an obligation to offer mercy to those innocent persons whose lives are in danger.

The hypocrisy however, cast upon “pro-life” activists is certainly not equally binding upon those considering themselves “pro-choice.” By virtue of the “pro-choice” argument, life in the womb is either arguably not yet human, not yet deserving of protection, or not deserving equal protection to the life, mental health, or desire of the mother. In any case, the starting point of life under the legal and moral scope of “pro-choice” protection is currently at one’s viable birth. This reduces the argument of innocence to that of desire and convenience when it comes to life. Quality of life becomes a higher virtue – a right above existence itself.

The recent Women’s March of 2017 explicitly excluded pro-life feminist organizations, stating that the March’s platform is pro-choice. Again, excluding the rights of the most vulnerable and innocent among our society, and the opinions of those women who hold these truth to be as self evident as their own right to life. By the same logic, those who consider themselves pro-life in defense of other marginalized groups such as refugees should have also been publicly excluded.

Many progressive groups opposing any and all rights of the unborn lent their voice and support to the Women’s March, adopting as a mode of female unity, the symbol of female genitalia. This included knitted hats and costumes representing female genitalia, thus reducing “womanhood” to that of the most basic sexual part of the woman.

This certainly should have struck an offensive cord for all women, much less a community preaching “the whole is greater than the sum of its parts.” It should have brought discomfort to the woman who has been sexually abused and violated, and it most certainly should be a cause of action to educate women on their true value and worth through dignity endowed by their very creation.

In conclusion, we are all obligated, by virtue of the gift of our own existence, to defend the lives of all people. The starting point of which is the most innocent and vulnerable – the unborn. Recognizing the gift and right to life itself for all human beings is necessary in moving forward to defend life beyond birth – hence both Genesis and The Declaration of Independence. Defending this right to life extends throughout the natural life of all persons. It extends even to those outside of ones nation whose lives are in grave danger.

Confusion, hypocrisy, and distortion of truth primarily occur from the disordered hierarchy of rights – often placing desires and comforts above life itself – which is the greatest right.