Curious George and the Nazis 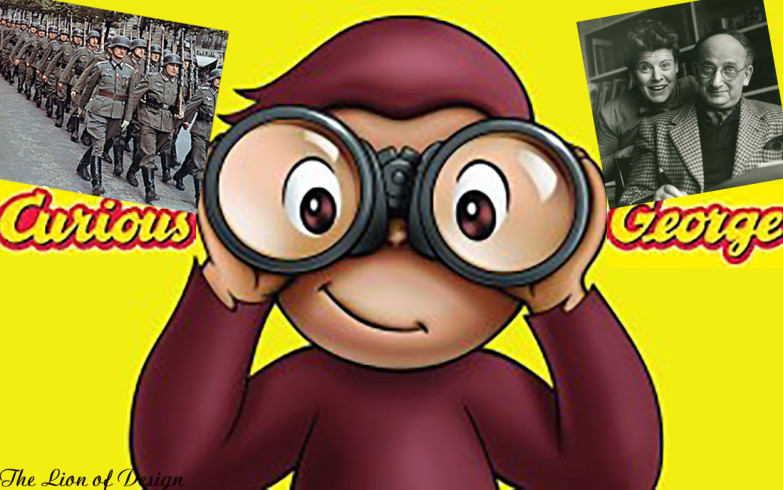 Well if the title of this post doesn’t say “Children’s Book,” I don’t know what does! The truth is that Curious George is as much a staple for American kids as apple pie. In fact, for most US children, Curious George television shows and stories are some of the first to be introduced. As parents, we can well remember the beloved monkey and the man with the yellow hat, navigating through their sordid adventures and comical mishaps.

But Curious George almost…wasn’t, because his creator; H.A. Rey, had a narrow escape from the Nazis 76 years ago! I was intrigued as I began to uncover more and more of the back story of this fascinating author. His talents, life on three continents, pet monkeys, published books, and finally, his long and arduous escape on bicycle from the Nazis! Imagine how many talents and contributions such as Curious George were lost to that tragic holocaust. Thankfully, the story of H.A. Rey is one to be told!

Hans Augusto Reyersbach was born in 1898 in Hamburg, Germany, to Jewish parents. There, he grew up a few blocks from the exquisite Hagenbeck Zoo, where he fell in love with animals. Hans developed his writing and painting skills throughout the years, often characterizing the zoo animals he affectionately loved to watch.

It was during that time that Hans met the unforgettable Margarete Waldstein, at her sister’s 16th birthday party, in Hamburg. Margarete was a talented artist in her own right, and attended the Bauhaus art school for photography. The two lost touch and she eventually moved to Brazil to escape the rise of Nazism creeping up in her homeland. It was there that she was once again reaquainted with Hans, who had also been living in Rio, and the two fell in love.

Margarete and Hans were married  on August 16, 1935, became Brazilian citizens, and changed their names to Margaret and H.A. Rey. Life in Brazil was filled with excitement for the Reys, as they began their married life together. They would often visit zoos together with their sketchbooks and cameras, and even had two marmosets as pets!

In 1936 the Reys left Rio on a ship, sailing to Paris for a honeymoon. As they stayed at the Terrass Hotel in Paris, they fell in love with the city, and particularly the neighborhood of artists, known as Montmartre. The Rey’s decided to set up shop in their hotel apartment, and thus Paris became home.

Hans published several books for adults, and then had an illustration of a giraffe printed in a French magazine. This giraffe would be the big break for H.A., as it caught the attention of editor Jacques Schiffrin, of the famous Gallimard.

Curious George Comes to Be

H.A. signed a contract with Gallimard in 1939 for his first children’s book; Rafi et les 9 Singes, later published in England as Raffy and the Nine Monkeys. This book featured the charming giraffe, as well as a family of nine monkeys, one of which would become, you guessed it, Curious George!

If you can believe it, George started out his days in the limelight as “Fifi.” Not at all surprising why it was later properly changed to George, in America.

War on the Horizon

Only a few months after the Rey’s celebrated the publication of their first children’s book, World War II broke out in France and the Reys knew their lives were in danger. Millions of refugees were scrambling to flee the country as Hitler’s army began to close in.

They Rey’s prospects looked bleak. They had no car, few trains were running, and when Hans desperately sought out bikes, it seemed that they had all been sold. As a final effort, Hans bought bike parts and worked through the night to assemble two bicycles. They gathered only what could fit on the bikes, including a copy of Raffy and the Nine Monkeys, as well as a new manuscript about the mischievous Fifi. 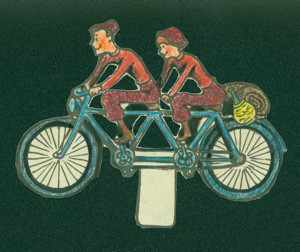 At dawn on June 12, 1940, H.A. and Margaret made their escape on the rainy Paris roads by bicycle.

Their dangerous journey and narrow escape is nothing short of miraculous. The Reys traveled roughly 493 miles to Bayonne, France, close to the border of Spain. Freedom was finally in their grasp, after weary days of travel, and nights spent on the floors of barns, schools, and restaurants. The borders had all been secured however, and their lives rested in the hands of one man.

Aristides de Sousa Mendes do Amaral e Abranches was the Portuguese consul-general in Bayonne during WWII. Defying the Portuguese Prime Minister, Sousa Mendes ordered thousands upon thousands of visas and false documents to Jewish refugees. For the sake of “saving innocent lives,” Sousa Mendes later became the first diplomat to be honored by Israel as one of the Righteous Among Nations. Despite threats, eventual public punishment, blacklisting, and an inevitable nervous breakdown, Sousa Mendes never stopped issuing the visas. In response to the charges against him, Sousa Mendes wrote,

It was indeed my aim to save all those people whose suffering was indescribable.

When the Reys reached Bayonne, strict enforcements were already in place to limit refugees from entering Spain or Portugal. Thankfully the Reys had Brazillian passports, and needed only to get to Lisbon, where they could board a ship. They sailed on the Angola from Portugal to Brazil, and from there took another ship for their final destination; New York City!

They first set eyes on the Statue of Liberty on October 14, 1940, and found a permanent home for themselves there. Only a few weeks after settling in NY, the Reys met with American editor Grace Hogarth, who signed a contract with H.A. for four children’s books. Finally, H.A.’s manuscript about the curious monkey would get its much deserved chance.

With a new continent, came more change. As Hans and Margarete had done to their own names upon leaving Germany, the names of the characters in H.A.’s book were also changed. In 1942, the beloved character of Curious George was born into the hearts of all American children, and there he has remained. H.A.’s original book, Cecily G and the 9 Monkeys was also published by Houghton Mifflin, and has remained in print for over 70 years.

Who knew that behind such a warm and fuzzy character of innocent mischief and endless silliness, rested a bold and historic journey incomparable to any I could imagine. 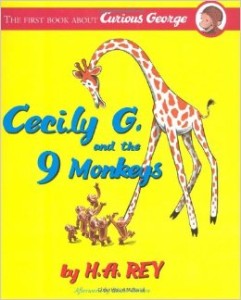 *I highly recommend H.A.’s original book, Cecily G and the 9 Monkeys, with the kid-friendly historical afterword by Louise Borden, on how Curious George came to be. It is a treasure!

Ages 7-10: The Journey That Saved Curious George: The True Wartime Escape of Margaret and H.A. Rey