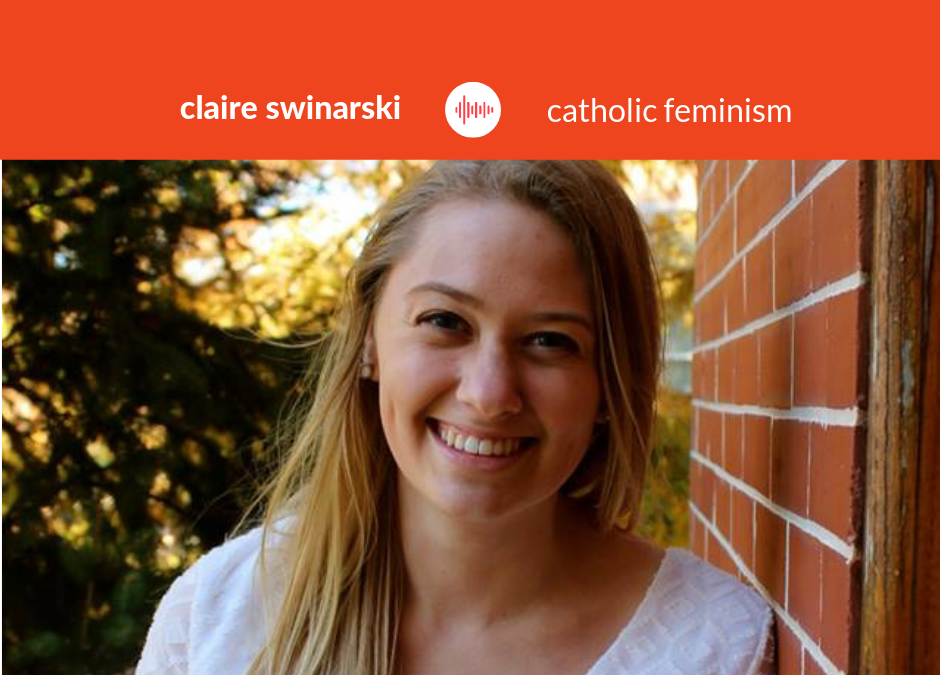 Feminism is largely associated with women’s rights. It has remained a fluid term throughout its several waves, currently promoting reproductive rights and the abolition of gender. It seems almost impossible to imagine how feminism and Catholicism could possibly share any ideologies at all, much less considering Jesus, Mary, and many saints to be feminists. Claire Swinarski of The Catholic Feminist joins me on this episode of The Dignity of Women to explain how Catholicism and Feminism are compatible and intertwined.

Claire Swinarski, a 2013 graduate of the University of Wisconsin-Madison, has a bachelor’s degree in mass communication and political science, with a certificate in criminal justice. She served as a FOCUS missionary from 2013 to 2015. Claire is a writer and the founder and host of The Catholic Feminist podcast. She lives in Wisconsin with her husband and two children.

“The Church is absolutely filled to the brim with examples of believing in the importance of womanhood. The world needs so much more than your impeccable cookie-baking skills or your ability to quote scripture from memory. It needs more than your hashtags. It needs the resilience, strength, and true beauty given to you by God.”

Is it possible to be both a Catholic and a feminist? Claire Swinarski, writer and creator of The Catholic Feminist podcast, believes it is.

“I’m a feminist for the same reason I’m bold and honest and sometimes ragey: because Jesus was all of those things.”

In Girl, Arise!: A Catholic Feminist’s Invitation to Live Boldly, Love Your Faith, and
Change the World, Swinarski argues for the reconciliation of the two identities by demonstrating the strengths and abilities women have to share with the Body of Christ, the importance of women throughout the history of the faith, and how the love you experience through Christ and the Church can change the world around you.

Swinarski points out that while both “feminism” and “Catholicism” can mean different things to different people, both feminists and Catholics desire to make the world a better, fairer place. And that by treating women with dignity equal to that of men—by calling them his friends and teaching them—Jesus acted as a feminist as well.

In her book, Swinarski addresses her frustration with the traditional concerns churches ascribe to women, as shown by the many talks directed at women focused on marriage and modesty rather than social justice. She pinpoints the areas where modern feminism goes too far, arguing against abortion and exploring what it means to serve others rather than focus on personal needs first.

Swinarski champions Biblical women—including Vashti in the book of Esther, as well as Sts. Thérèse of Lisieux and Joan of Arc, Mary Magdalene, and the Blessed Virgin Mary—to show how their faith influenced their actions, even when those actions went against traditional norms and roles of women.

“If the Church truly believed the only qualified women were quiet, subtle Thérèses, we wouldn’t hold up boisterous, badass Joans as shining examples of womanhood as well.”