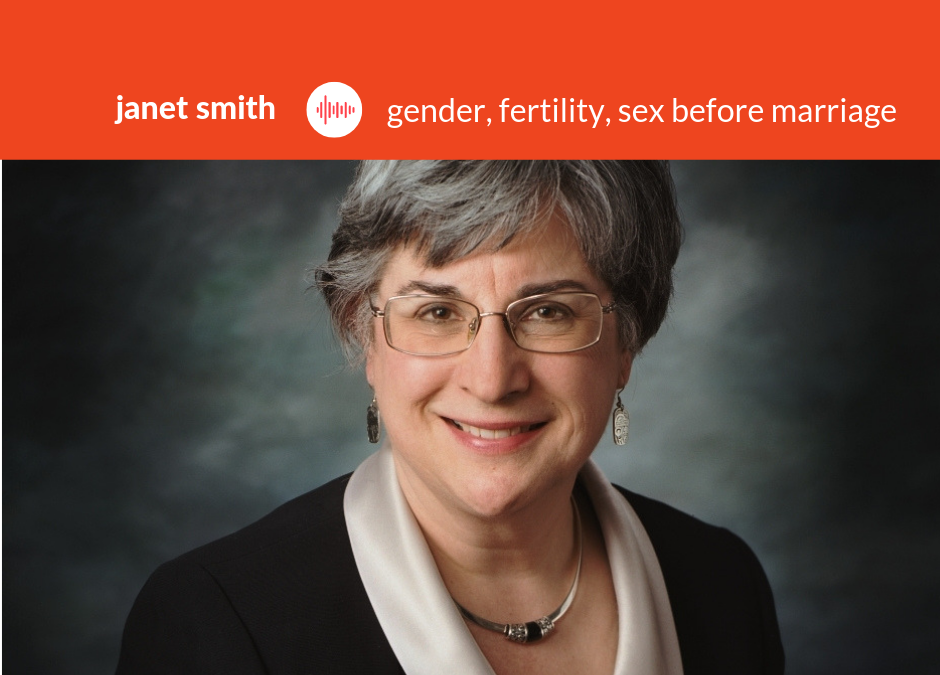 The first time I heard the CD Contraception: Why Not?, which made Janet E. Smith a household name, I was completely blown away. I knew that the Catholic Church frowned upon contraception, sex-before-marriage, and cohabitation…but I didn’t really know why (or at least couldn’t defend the position in an argument). With that same straight-forward and easy to digest wisdom,  Janet E. Smith joins me on this episode of The Dignity of Women to discuss gender issues, fertility, sex-before-marriage, and the lasting relevance of Humanae Vitae.

Janet E. Smith is the Father Michael J. McGivney Chair of Life Ethics at Sacred Heart Major Seminary. She taught at the University of Notre Dame for 9 years and the University of Dallas for 12. She is the author of Humanae Vitae: A Generation Later, The Right to Privacy, and Self-Gift: Humanae Vitae and the Thought of John Paul II . She edited  Life Issues, Medical Choices (with Christopher Kaczor) Living the Truth in Love: Pastoral Approaches to Same-Sex Attractions (with R. Paul Check) and Why Humanae Vitae is Still Right.

Professor Smith served three terms as a consulter to the Pontifical Council on the Family and also served as a member of the Anglican Roman Catholic International Commission, III for 8 years.

She has received two honorary doctorates and several other awards for scholarship and service.She has appeared on the Geraldo show, Fox Morning News, CNN International, CNN Newsroom, Al Jazeera and has done many shows for various series on EWTN.

More than two million copies of her talk, “Contraception: Why Not” have been distributed.

Janet E. Smith’s work has had a heavy focus on sexuality from a Catholic perspective, including issues of natural family planning, contraception, homosexuality, and life issues. Smith’s work has often leaned on Humanae Vitae (Encyclical Letter of Pope Paul VI in 1968), which she maintains is equally relevant today. Janet speaks on gender-confusion, same-sex attraction, and homosexuality, which have become pervasive and widely accepted in our culture. Many Catholics find it hard to combat these issues among family, friends, and society – even with the truth. Janet speaks on why homosexuality has become an encouraged avenue for youth to experiment with, and what is at the root of the current gender confusion.

Feminism, Motherhood, and the Church

Janet E. Smith’s chapter, Feminism, Motherhood, and the Church, from the Wethersfield Institute Proceedings in 1990 is one of my favorites! In it, Janet tackles head-on the disdain and incompatibility that motherhood has taken from many of the leading feminists. Janet addresses this rejection of the natural state of conceiving and bearing children, and the push to remove this burdensome process from the female altogether, which has highlighted many reflections of prominent feminist philosophers. The question in this segment is whether this element of feminism is in fact a hatred of a woman’s own nature?

God is not masculine or feminine and the relationship between men and women in Genesis is not hierarchical or patriarchical, but equal. This understanding has been lost and a power struggle has ensued. “Feminists generally are more concerned to see the workplace restructured so that it allows women with small children to remain at the job than to restructure the economic system so that it allows mothers with small children to stay at home.”

“Virginity and motherhood” are the “two particular dimensions of the fulfillment of the female personality.” ~Mulieris Dignitatem

With the widely accepted use and practice of Natural Family Planning within the Church, how do families navigate the moral conversation of welcoming children who can be properly loved and educated, in preparation to merit eternal life? Janet explains the “providentialist” mentality, which is not found within Church teaching, and can strain a marriage and family, by leaving conception of children entirely up to providence. While this may work well for some families, others many find their physical, psychological, economic, and social health challenged by this. Prudence is the key in welcoming children – it requires constant discernment between the spouses in prayer.