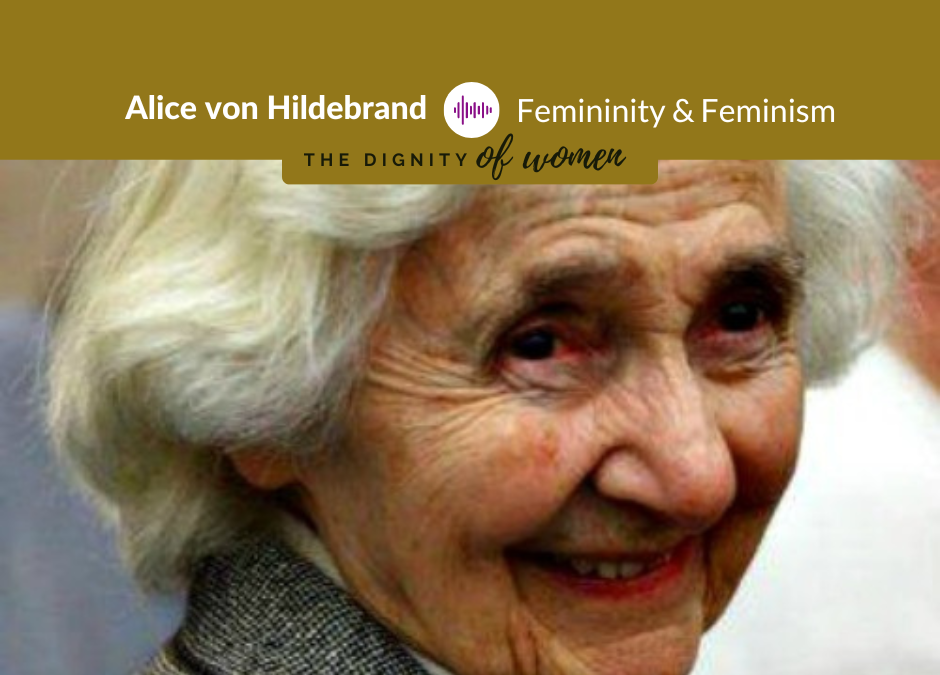 Alice von Hildebrand was close to her PhD in philosophy when she began applying to Catholic colleges – all of which turned her down, despite her strong curriculum vitae, because they refused to hire a women to teach philosophy. Alice had only been in the country for 7 years, speaking French most of her life previously, and at this point desperately needed a job. Hunter College (for women) desperately needed a substitute philosophy professor, so Dr. Von Hildebrand began immediately what would become a very challenging 37 year career, finally accepting an early retirement with the lowest possible pension. For 14 years she was paid hourly, with no medical coverage, no tenure, and a teaching schedule that kept her until 10PM, precisely because she was a woman. Dr. Von Hildebrand won an award for excellence in teaching – competing against 600 professors. Alice von Hildebrand joins me on this episode of The Dignity of Women to share her great wisdom on femininity, feminism, and the greatness of faith that distinguishes the two.

Alice von Hildebrand is a treasure to the Catholic Church, as was her late husband, Dietrich von Hildebrand. Both were philosophers and professors, and the two have brought great richness through their many years of teaching, writing, and their powerful example.

Alice Jourdain von Hildebrand was born in Belgium on March 11, 1923. She arrived in New York City in 1940 as a war refugee. Soon afterwards she met Dietrich von Hildebrand and began philosophy studies at Fordham University as his student where she took nearly 18 courses with him. The two were married in 1959 and collaborated on writing many books. Starting in 1947, she began teaching at Hunter College in New York City. After enduring 14 years of hardships from the college on account of her sex, she was appointed Professor of Philosophy, where she served for 37 years. Upon her retirement in 1984 she received an award for excellence in teaching by Hunter College after having achieved the highest student evaluation at the College.

In addition to her many years at Hunter College, she has also taught at the Catechetical Institute in Dunwoody, NY, Franciscan University of Steubenville, the Thomas More Institute in Rome, Ave Maria College, and at the Notre Dame Graduate School of Christendom College.

Dr. von Hildebrand is the author of numerous books, including The Privilege of Being a Woman, Man and Woman: A Divine Invention, By Love Refined, By Grief Refined, The Soul of a Lion, as well as numerous published philosophical papers.

In 2004, with the support of Pope Benedict XVI, Dr. von Hildebrand joined several students of her husband in launching the Dietrich von Hildebrand Legacy Project (www.hildebrandlegacy.org) to ensure the long-term promotion and dissemination of her husband’s life and thought.

Alice von Hildebrand could be considered a radical for the traditional, the truth, and the faith. Her authentic look at womanhood as an intentional and crowning design of creation (The Privilege of Being a Woman) challenges both those who see women as the lesser sex and those feminists who seek to abandon or exploit the riches of their own sex.

The fact that I recorded this podcast in-person often gets a shocked reaction from philosophy and theology fans alike. I must admit that I haven’t fully processed it myself, and have resolved to be happy with gratitude alone.

Yet, it’s not only the fact that I recorded it in-person that is amazing, but it’s the way in which the whole thing came about, and the reality that it was recorded in Alice’s living room – in the very same house that she and Dietrich von Hildebrand lived, and where he died!

When I began writing, after earning an MA in theology, the direction my work was headed became quickly evident. Having lived outside of the Church, and strongly influenced by the feminist movement and the philosophy of Simone de Beauvoir, there could be only one path to follow in embracing truth. I chose to accept the deep richness of Catholicism, ergo rejecting the disillusioned ideologies of feminism, and to my great amazement, my mind and heart were deeply healed and transformed to the beauty of the female soul.

Artistically put to words by Pope John Paul II in Mulieris Dignitatem (The Dignity of Women), I felt like the great St. Paul must have felt during his dramatic transformation from persecuting Christians to spreading Christianity. The truth had set him free!

The Lord put strongly on my heart the desire to minister to women, a compassion which had always been active – yet not to its proper credit. Alice von Hildebrand was the antithesis of Simone de Beauvoir. Her extraordinary life’s struggles, brilliant mind, passion for the faith, and her powerful directness in articulating the truth awed me. “Now, this is a woman who is living in the image and likeness of God,” I thought. “This is a woman encountering fully her feminine genius!”

Fast-forward to a week before October 1, 2018 – the feast of St. Thérèse, and my visit to the von Hildebrand household. I had only recently begun podcasting, and I was surprised at how well it was going. As my husband and I sat dreaming one evening, he asked who would be the one guest I would have on the podcast, if it could be anyone living today. I answered without a moment’s hesitation, “Alice von Hildebrand!” We both laughed.

That night I lifted up a simple prayer to the Lord.

The next morning, while hanging around to chat after my monthly women’s group, a dear friend mentioned Alice’s name in our conversation. I stopped her short and she explained that a mutual friend of ours had been visiting and developing a friendship with Dr. von Hildebrand. Dialing that friend’s number only minutes later led to the hope of a conversation of my own with Alice.

I was on pins-and-needles that night and the next morning, when at last a text came through that said, “The meeting is set! Monday, October 1st at 2PM. Happy feast of Saint Thérèse!”

The conversation I had hoped for would take place in less than a week from the moment I uttered that humble prayer to the Lord, and it would take place in-person, at the von Hildebrand’s home! It all seemed so surreal as I boarded the plane, and I must have thanked that Lord a million times with each passing cloud that sailed by my small rectangular double-glass window. This was such a beautiful moment of confirmation of the work I had been participating – reclaiming femininity and challenging destructive feminist ideologies with the truth.

St. Thérèse! There is no doubt that St. Thérèse had something to do with this gift – for that is exactly what it was. Alice von Hildebrand remains a legend to me, for her continuing faith and regard for Holy Mother Church, and for her tireless dedication to truth and to particularly upholding the true dignity of women and of the God-given gifts they naturally have to offer the Church, family, society, and the world.