Married to a Minimalist 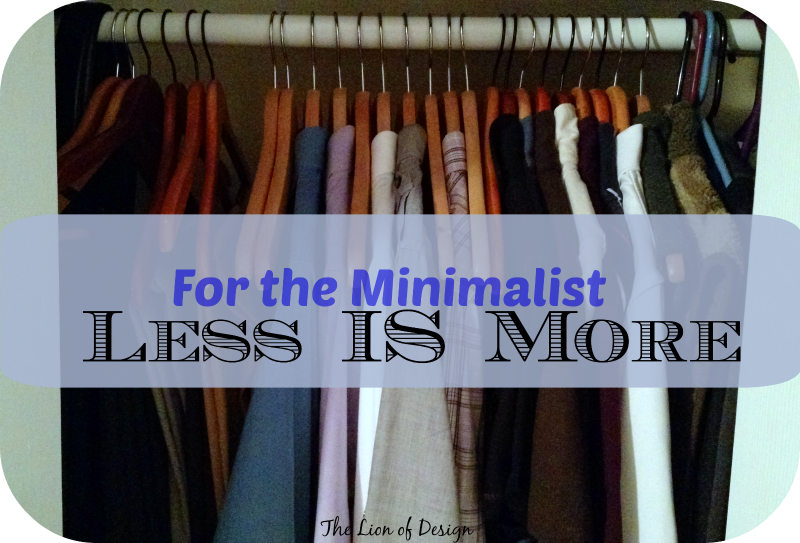 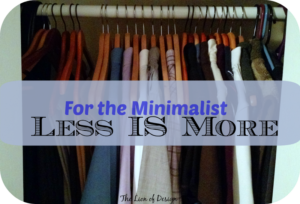 When I first met my husband and actually visited his bachelor “pad” apartment, it was about as inviting as a dental office. The walls were stark white and completely bare. I mean, there wasn’t so much as a football poster tacked up to any one of them. The apartment contained the bare essentials when it came to furniture as well.

There were only two conclusions I could have drawn from this:

Thankfully, the first wasn’t true! And as it turns out, the second wasn’t either. In fact, he had lived there for the better part of three years by this point, and as far as he was concerned; the place looked great! It was bright, clean, and there wasn’t any unneeded furniture to collect “stuff” on. There was nothing to distract him, and more importantly…to dust. (Still not quite sure why that was an issue, seeing as this man has never met a rag or mop he didn’t love.)

At the same time, I was living in a house with four young ladies (mostly very messy ladies!) Our rooms were small and we had each acquired quite a bit of “stuff” since college. A friendlier term to describe me, before Hoarders that is, was a pack rat. You can imagine my future spouse’s anxiety when he beheld my living quarters.

Despite the fact that I was studying Theology and very familiar with the concept of “loving poverty,” I certainly had a hard time letting go. Beyond religious consecrated life, I really had no concept of “minimalism” at all. It seemed to be nonexistent in our consumerist culture. I mean, it made sense for religious to live this way…but not me. Practically speaking, the hermits in the desert couldn’t very well hang their many trinkets and treasures on cacti, could they?

My generous husband bit his tongue many times throughout our relationship, when it came to “stuff.” But the day was soon coming, when my “stuff” would become his “stuff,” and that was just too much stuff for him to bear!

During the wedding planning and the marriage prep (when everything hits the fan), he guaranteed me that AT LEAST half of my things would somehow be “lost” on the way to our future apartment. At first I felt a little wounded and defensive of my “you-never-know when-you’re-gonna-need-it” stuff. But as I went home and took inventory that night, I began to root through clothes I forgot I owned, odds and ends without purpose, and mounds and mounds of additional acquired junk. Suddenly, I began to get anxious myself.

What in the world was I doing with all of this…STUFF? Why had I allowed myself to traipse from household to household since college, with this surmounting mountain of “I might need it someday?” “Ahhhhh!” the “stuff” was consuming me and I needed help. I was frozen. Stuff will do that to you.

And then there was a deep relief. I was starting over. Ridding myself of my baggage. And thank GOD I wouldn’t be doing it alone! No, the man next to me would be sure that every yo-yo string, gum wrapper, and every tenth tote bag would make its rapid exit as quickly as it had come in.

This minimalism thing wasn’t so bad after all. In fact, it was just like being afraid to let go of sin, for fear of “losing” something needed, all the while losing freedom. I was breaking the cycle! I had finally discovered why “less IS more,” and as I purged, I found significant freedom from overwhelm and the trappings of consumerist culture…I was in!

My transformation to a “more” minimalist lifestyle was not without hick-ups however. Marriage is, after all, about give and take. There would be no white walls for this gal. “Oh no!” I just couldn’t live in a world without color. So, my new husband found himself grimacing in pain as he helped me paint an “accent wall” bright red (that’s love!) And to top that, there was also the time I went to throw some trash in the dumpster, and came back with a picture frame (still on our wall BTW.) You can imagine what he thought of this one.

While I’m certainly not a “100 Things or Less” minimalist, I do try to follow some basic principles so as not to get overwhelmed with stuff. And although I have significantly reduced the “things” I live with, I have somehow gained an abundance of “people” to live with in the process!

The Rules of the Minimalist: 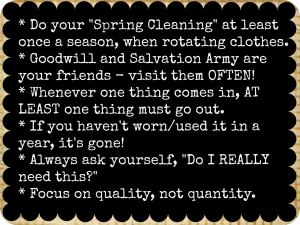