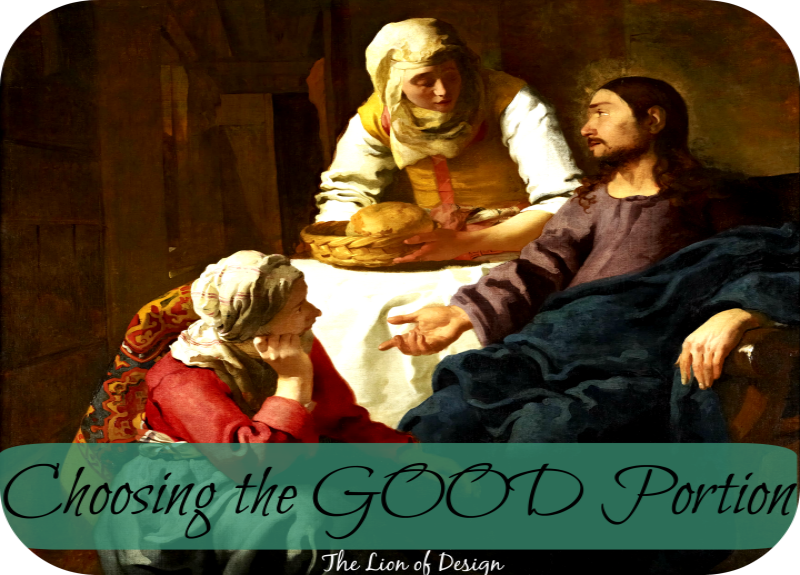 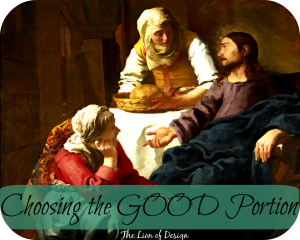 Christ in the House of Martha and Mary ~ Johannes Vermeer

Martha, Martha, you are anxious and troubled about many things

These words of our Lord to Martha certainly ring true to many of us! Admittedly, I have shrunk down in my pew when hearing them read. Suddenly dinner parties and weekend visits flash through my mind, in which I was so busy scurrying back and forth to care for everyone’s needs, I suddenly become starkly aware that I had no time to actually enjoy our guests.

Despite Martha’s anxieties, and well, even Lazarus’ death, we know that “Jesus loved Martha and her sister and Laz′arus” (Jn 11:5). That should give us some comfort. After all, Jesus still chose to visit them several times, and in fact, Bethany was affectionately referred by the disciples as the village of Mary and Martha.

The sisters; Mary and Martha, send for Jesus to come to Lazarus when he becomes ill. And just like the apostle John, who is known as the one Jesus loved, the sisters refer to their brother also as the one whom Jesus loves.

Despite the risk of the Jews wanting to stone Jesus in this area so close to Jerusalem, Jesus insists they go to Bethany to see the tomb of Lazarus, who he will raise. I love when he calls the wrapped dead man out of the tomb. There is such power in Jesus’ command, that goes far deeper than mere flesh:

Unbind him, and let him go.

Because of this miracle, many Jews came to believe in Christ and follow him. This made the Jews angry to the point of plotting Lazarus’ death.

Martha’s extreme faith should be highlighted more than any of her other accounts. For Martha was hands-down one of the most faithful people in the Bible! She, like Peter was given a child-like faith, which could have only come from the Holy Spirit.

Martha’s brother had been dead four days and there was much grieving in her household. Yet, when Martha heard that Jesus was finally coming, she ran to him while Mary stayed in the house. Martha was not angry with him, but rather and in spite of her extreme grief, she professes her faith in his supernatural ability.

Lord, if you had been here, my brother would not have died. And even now I know that whatever you ask from God, God will give you.

Jesus then tells Martha, before anyone else, that he will raise Lazarus. To her, a woman, he proclaims his famous resurrection and life discourse. After stating this, he asks Martha if she believes what he has just said. Martha answers:

Yes, Lord; I believe that you are the Christ, the Son of God, he who is coming into the world.

Yet Martha hesitates when Jesus tells her to have her brother’s stone rolled away, mindful of the stench.

There is no question that Jesus had a softness for Mary. His compassion for her weeping over her brother’s death causes Jesus to weep as well, for it is noted that “he was deeply moved in spirit and troubled.” Mary rises quickly and goes to Jesus when Martha tells her he has come. She also professes her belief to him, that he could have prevented her brother’s death.

There are two biblical accounts of Martha serving; one in John 12 and one in Luke 10. Perhaps they are the same account, or perhaps judging by the introduction of the two women, and the lack of mention of Lazarus’ death, they are two separate visits.

In John’s account, Jesus is at table with Lazarus as Martha serves them supper. Mary however, takes a whole pound of expensive ointment and anoints Jesus’ feet with it.

Now we know that Judas becomes indignant by Mary’s wastefulness of the nard, but can you imagine the shock of all the disciples when Mary lets loose her hair (normally covered), to wipe his feet with it?

Mary’s humility before the Lord was parallel to the sinful woman with the alabaster jar in Luke 7, who poured perfume on Jesus’ feet and wiped them with her hair. Just as Judas was put off by this gesture, so the Pharisee was appalled by this one while Jesus was at his house dining.

In Luke’s account, when Jesus and his disciples entered Bethany and came to the house of Martha and Mary, Mary sat at his feet listening to his teaching. This certainly fits her personality profile in John’s account! Always with Jesus, always near him, listening to him, anointing him.

Again Martha was…serving. The perpetual “supper-maker” was scurrying around making sure everything was just so. Of course, this time, perhaps the guest of honor is not one you want to reflect upon as without quality time spent.

Really? No? Can you imagine?

In fact, Jesus specifically tells Martha that only ONE thing is needful. Not place settings, or cleanliness, or even food itself. Jesus is our only bread of life, and in his presence Mary chooses him!

In heaven we will have no need of preparing, serving, or cleaning. Again, can you imagine?!

We will need and be consumed by one thing only, and that is Jesus Christ.

Am I preparing now for that banquet, to sit at the feet of Jesus (though prayer and reception of him in the Eucharist), or am I spiritually scurrying about making sure inconsequential things are to my liking?