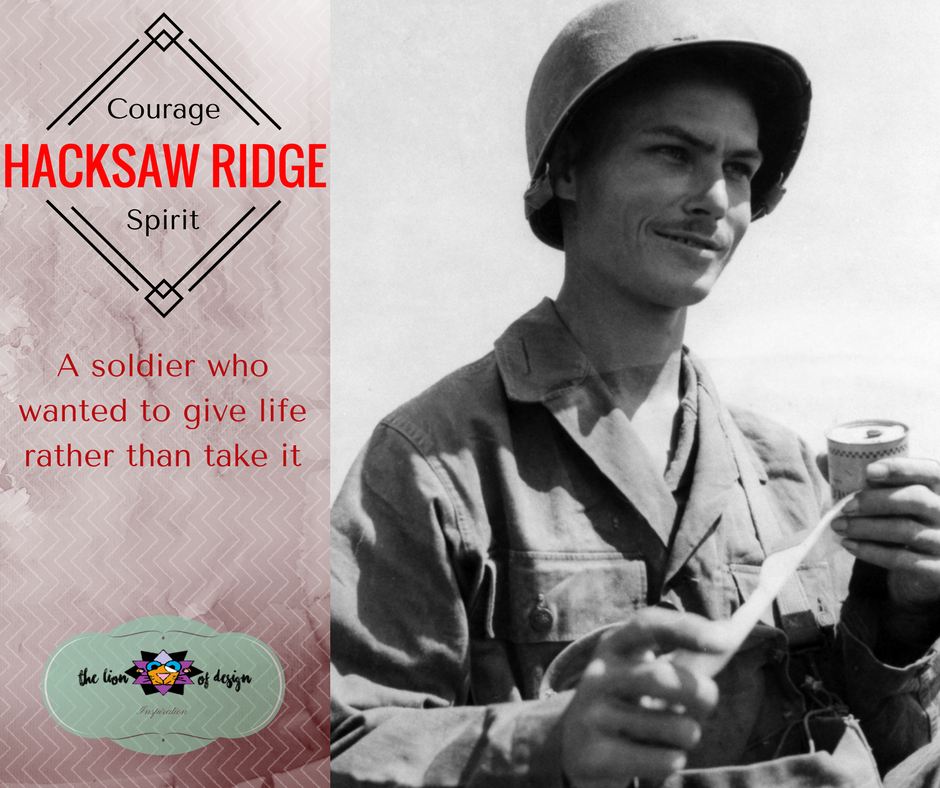 It seems crude to refer to a war movie as artistic. After all, the waves of mangled bodies falling in agony amidst plumes of smoke and fire can hardly be compared to a ballet, or anything the senses would recognize immediately as beautiful. But the art of Mel Gibson’s comeback movie, Hacksaw Ridge, was easily discovered in the dramatic narrative of a real man, and an unlikely hero, lost to history.

Gibson resurrected a character of courage and divine heroic bravery a decade after Desmond Doss’ own death in 2006, at the age of 87. Doss certainly didn’t fit the combat Rambo that many war patrons long to see, positioned staunchly behind an automatic weapon, spewing an arsenal of fire. Rather, Doss was a conscientious “cooperator,” as his character states in the film.

A country boy from Virginia, the viewer is emotionally pulled into Doss’ childhood as he recounts two highly impressionable incidents of his youth that made him recognize the magnitude of the fifth commandment – Thou shall not kill. Influenced by these personal experiences and his Christian faith as a Seventh-day Adventist, Doss vows to God that he will never again touch a gun. In fact it is his faith that seems to soften him as he grows, freeing him of the violence and rage instilled in him by his father’s example. Desmond’s choice to become a man of God despite the obstacles of family and the social culture of the Depression open doors to love and duty.

As Wold War II rages on, all able bodied young men are expected to enlist. In fact, as Doss recounts, the only two men in his town who didn’t qualify committed suicide. This all encompassing spirit of duty owed in service to one’s country at the time seems a foreign concept today. Driven by this heroic duty to serve, a recently engaged Desmond is not far behind his brother Hal in enlisting, yet instead of a combat position, Doss enlists as a medic.

Assigned without regard to his request for a medic position, Doss is instead assigned to a combat infantry division fighting in Okinawa and required to carry and handle a firearm. His refusal not only outcasts him as a coward, bearing weighty consequences of abuse, but also causes him to face legal charges and jail time. Doss wrestles with his conscience from the confines of his jail cell, a turbulence increased by a visit from his fiance asking him to cooperate in gesture with the military. Doss is unable to violate his conscience or his vow to God despite the pleas of his fiance and military pressure. The jail scene stirred a moment within me that echoed St. Thomas More held captive in the tower of King Henry VIII, similarly visited by a pleading wife. Both men concluded that they could not live with themselves or be the men they should be for their wives if they were to violate this most fundamental obligation to God.

The film’s artistry is embedded in the dramatic plight of virtue and heroic courage, which God himself lifts above the minds of men. Doss is at last free of charges and sent into war as a medic (without a weapon.) Gibson does not spare the atrocities of war as the men fall one after the other and are carted off in a bloody heap on the back of an army truck. Perhaps the crude reality of experience on the screen allows the viewer to reconsider the gravity of war and loss of human life due to it. If nothing else, the startling and traumatic moments endured by the young men in uniform give credence to the need for excessive compassion due survivors.

Doss seems to mysteriously pass unscathed through the bloodbath, saving many wounded and sharing small moments of faith with his countrymen. When at last his company retreats, Doss asks the Lord in prayer for further instruction and turns back alone into the rubble and destruction. He happens upon one man after another who is alive yet wounded, but left for dead. One by one Doss drags them out of harm’s way and lowers them down a 400 foot ridge using a pulley system. With bloody hands torn apart from the rope and a weak frail body deprived of sleep and nourishment, Doss turns to the Lord after each man is lowered, asking “Please help me get just one more.”

Desmond Doss rescued over 75 soldiers in the course of 12 hours on Hacksaw Ridge, averaging one man every 10 minutes, and is the first conscientious objector to be awarded the Medal of Honor, done so by President Harry Truman. The truth is that Doss did not move through the battle unscathed. He suffered injuries from sniper bullets as well as a grenade explosion. It should also be noted that he did actually kick the grenade that was thrown at his unit, which caused much of the injuries endured to his legs. Yet despite this, he continued to care for the other wounded men, even crawling off a stretcher to give his place to a more critically injured comrade. Desmond Doss redefined courage to the men of his unit who had gotten accustomed to calling him a coward, and to his commanders who tried to have him released or imprisoned.

Desmond was actually drafted, but he said “I felt like it was an honor to serve God and country. We were fightin’ for our religious liberty and freedom.” He enlisted as a medic because of the influence of Christ, who gives life rather than takes it. “I’ve pictured Christ for savin’ life, I wanna be like Christ go savin’ life instead of takin’ life and that’s the reason I take up medicine.” Desmond met his wife Dorothy at church and she said she married him because “He was a good Christian and I figured he would help me go to Heaven.” As portrayed in the movie, Desmond did always carry a bible and was mocked by fellow soldiers for his prayers before bed. Of the bible Doss said, “That was my main source of strength all during the war and in the service.” The men of Company B, won over by Doss’ bravery and sacrificial service to them in turn risked their life to find the bible when it was lost on the ridge.

Doss’ battalion commander who tried to have him transferred out of his unit later said, “He was one of the bravest persons alive, and then to have him end up saving my life was the irony of the whole thing.” One Japanese soldier later tells how he had Desmond in his sights, but every time he tried to fire his gun jammed. Perhaps this is just one of many testimonies to the divine interference of a man who wholeheartedly followed the Lord, even into the heat of battle. Desmond Doss will certainly never be forgotten in the hearts of those men whose lives were saved by the strength of his prayer, “Lord, please help me get more and more, one more, until there was none left, and I’m the last one down.”