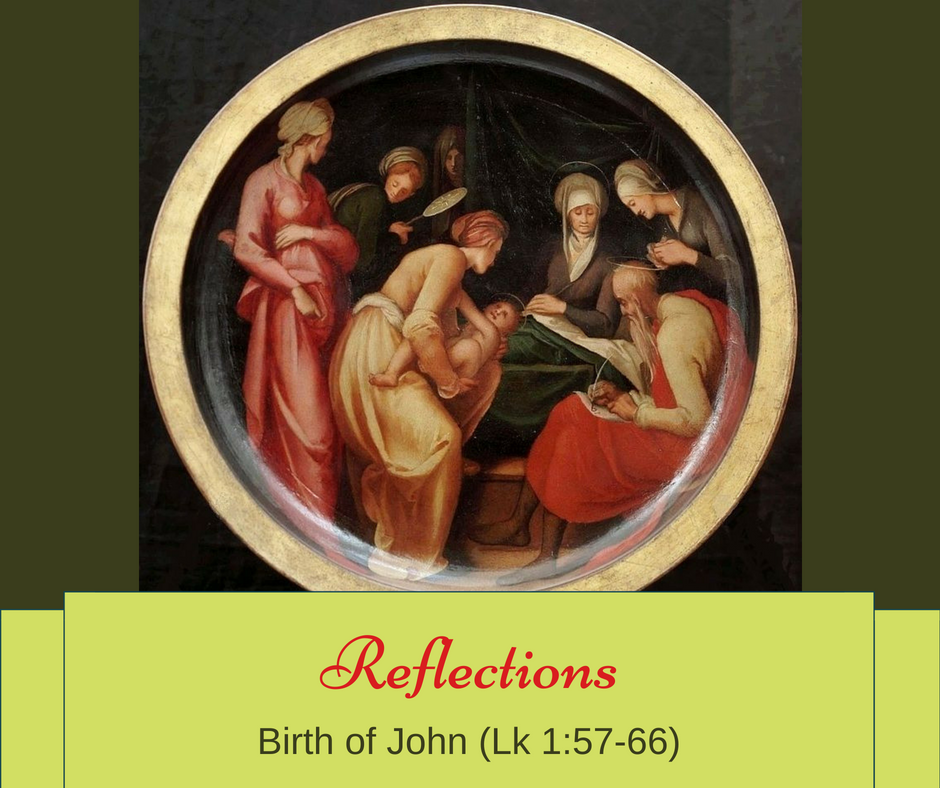 How Did She Know?

And on the eighth day they came to circumcise the child; and they would have named him Zechari′ah after his father,but his mother said, “Not so; he shall be called John.”

We know that earlier, when Zechariah’s priestly duty required him to burn incense in the temple, he was visited by the archangel Gabriel, who said to him:

Do not be afraid, Zechari′ah, for your prayer is heard, and your wife Elizabeth will bear you a son, and you shall call his name John.

But, because Zechariah did not believe Gabriel’s words, he was made silent by the angel, until the prophesy came to pass.

So, the question is…how did Elizabeth know? Many women of the time were illiterate, and we are not given the information to know if Elizabeth had been taught to read or not. She was a descendant of Aaron and her husband was a priest, so she may or may not have been educated in some manner.

Somehow, Elizabeth knew her son’s name was to be John.

The Trust and Obedience of Elizabeth

Not only did Elizabeth know that her son’s name should be John, but as well, she had the courage to speak it to her neighbors and kinsfolk at her son’s circumcision. Did she know if her husband would ever regain his ability to speak? Did she know if he would remain faithful to what the angel had told him in the temple?

What Elizabeth knew, was that her conception was a miracle and a gift. She trusted the Lord in his will for her son, and in naming him John, she fully gave him to the Lord. Rather than giving him a traditional familial name, which would associate him forever with their lineage, Elizabeth proclaimed his greatness before the Lord.

The Mercy of Conception

Now scripture tells us that Elizabeth and Zechariah were righteous and blameless before the Lord. Yet, Elizabeth was barren, and she and her husband were both advanced in years. We also know that Zechariah prayed to the Lord for his wife to conceive a child, because Gabriel says to him, “your prayer is heard.”

The fact that Elizabeth was barren was probably perplexing to her neighbors and family, who considered infertility a curse from the Lord. In the same way that we might not understand how many bad things can happen to a friend or family member who is very good, Elizabeth’s friends and family may have felt the same pity for her and Zechariah.

Who would carry on their lineage and family name? Who would they leave their inheritance to? Who would take care of them in their old age? Who would give them grandchildren to delight in?

John certainly would not be the heir to provide many of these things, but he instead would provide significantly more for all of humanity. John would be the blessing of his parent’s faithfulness to the Lord – he was the last of the great prophets!

All That was Hidden

Scripture tells us that all that is hidden will be revealed. This is made apparent from the very start of Luke’s gospel. The knowledge of John is hidden away from the world, and only known to Elizabeth and Zechariah.

After these days his wife Elizabeth conceived, and for five months she hid herself, saying,“Thus the Lord has done to me in the days when he looked on me, to take away my reproach among men.”

Elizabeth’s conception was the sign the archangel Gabriel used to show Mary of the greatness of the power of God, when he announced to her that she had found favor with God, and would conceive the savior:

And behold, your kinswoman Elizabeth in her old age has also conceived a son; and this is the sixth month with her who was called barren. For with God nothing will be impossible.”

Then Mary went in haste to the house of Elizabeth and Zechariah. Elizabeth was filled with the Holy Spirit once again, and there was power in the voice of the Blessed Mother, for when Elizabeth heard Mary’s greeting, John leaped in her womb, and Elizabeth loudly proclaimed:

Blessed are you among women, and blessed is the fruit of your womb! And why is this granted me, that the mother of my Lord should come to me?

The Role of Women

Elizabeth was given the great blessing of an angelic intercession, heralding in the end of her barrenness, and making her the mother of a prophet. She was given the privilege of first knowing that the Lord had come to earth, and of having him present in her own home. The grace rested on Elizabeth to first proclaim the name of her son John to all who were present at his circumcision.

Elizabeth was blessed to see her husband’s tongue freed of its silence, and to hear the divinely inspired words he proclaimed of her son:

And you, child, will be called the prophet of the Most High;
for you will go before the Lord to prepare his ways,
to give knowledge of salvation to his people
in the forgiveness of their sins,
through the tender mercy of our God,
when the day shall dawn upon us from on high
to give light to those who sit in darkness and in the shadow of death,
to guide our feet into the way of peace.”