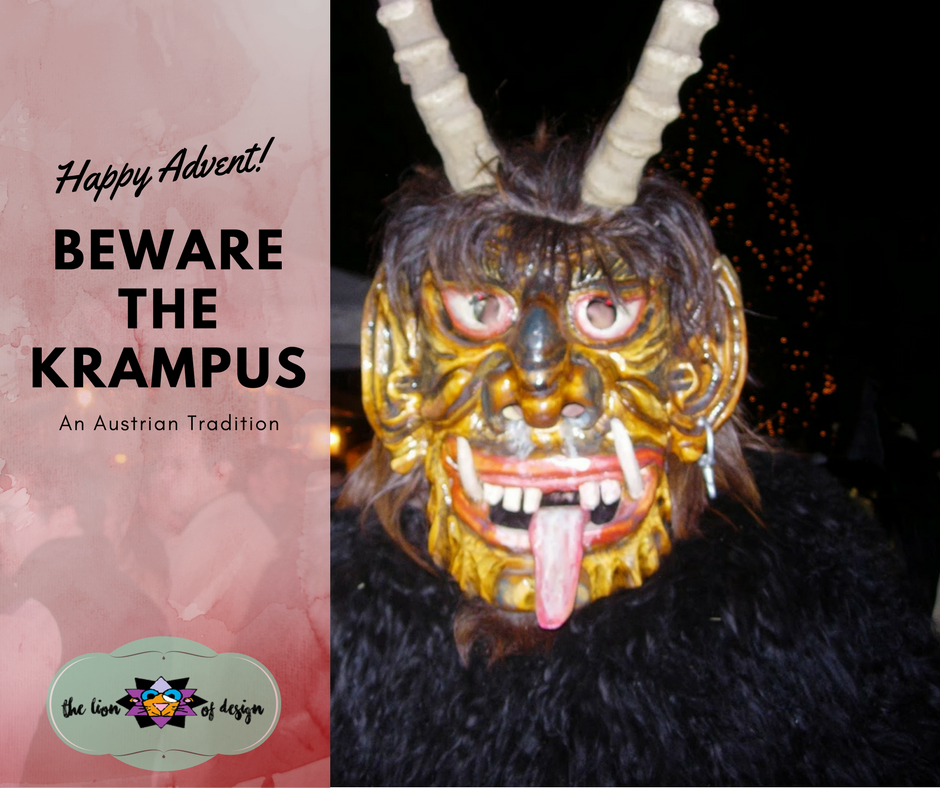 Studying abroad in Austria presented many cultural challenges and unique experiences along the way – making it one of the most memorable times of my life.

Forever engraved in my mind however, when reflecting upon that snowy Advent Season in the Austrian mountains, is the interesting and terrifying Krampus tradition! What is a Krampus you may ask? Many of us American students were wondering the same thing. Sure, we’re used to the usual ghouls and goblins on Halloween night …but Advent?

You see, the Krampus are demonic characters from Germanic folklore who emerge on the eve of St. Nicholas’ Feast Day. They are introduced at Advent Festivals across the country, where much pomp and circumstance is made about the gates of hell opening for the temporary visitation of these spawns of Satan. Their purpose? They come to purge the sins of the people – by whipping them as they run through the streets. And this my friends, is supposed to properly prepare us for Christmas!

If you EVER had qualms with the Catholic Church’s practice of confession… might I suggest you visit Austria? Needless to say, this was certainly not the way any of us Americans had ever “prepared” for Christmas before.

So there we were at the Advent Festival, enjoying the Austrian sausage and spiced cider in the bitter cold of the Austrian Alps as the snow fell. Suddenly an announcement was made that the gates of hell were opening. What? Then a red light shone as a smoke machine kicked into full gear. Oddly, I had never hoped to hear such an announcement, not in this life or the next.

One by one, large beastly characters started to run through the gate; red eyes glowing, covered in real animal hair. There was both laughter and screams amidst the jingling bells of the creatures emerging from the smoke. We couldn’t tear ourselves away from the strange cultural production… that was, until the creatures got close enough.

Much to our surprise, it turned out these Krampus were not just there for looks. As they approached us, I felt the painful sting on my leg of several long leather strips from the Krampus’ whip. This was no joke – these were real whips! I took off running, and of course, they followed. It turns out that the ones who run get chased with even greater pursuit by the Krampus – who have surprisingly amazing dexterity for those in over-sized costumes.

The tradition of the Krampus is held dear by the Austrians, and the competition to prepare the best Krampus costume is quite competitive. Participants often spend the better part of the year making their costume as spectacular as possible. This includes real animal hair, teeth, and heaven only knows what other parts are used. Red eyes that glow, warning bells and drums, and whips that are fashioned out of leather and chains.

This Germanic cultural gem may have caught us by surprise, but it has since become a favorite memory of our overseas travels. And I’m convinced that the terrified reactions of the American students was equally the highlight of the Austrian’s AdventFest that year.

Interest in the Krampus has seemed to slowly catch on in other countries as well, where it certainly shakes things up before Christmas. For me, the Krampus will be forever united to my Advent Season – from afar of course (where the whips can’t reach me)!