Being a Broken Thing 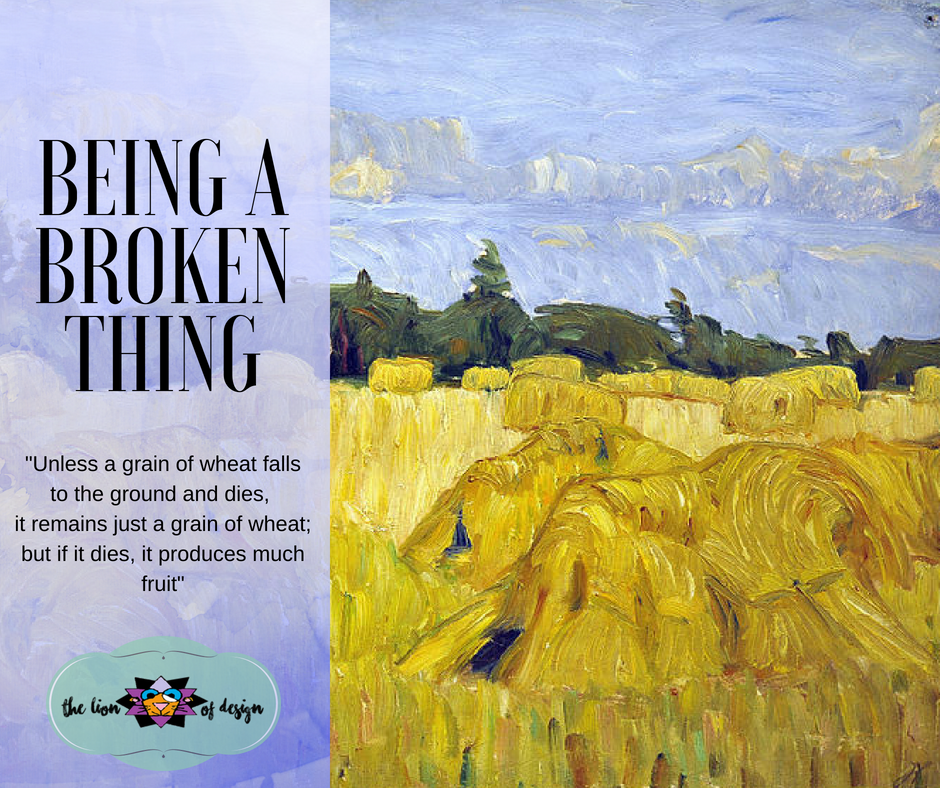 One of the hardest metaphysical realities, taught to us both by Christ and through nature, is finding new life through death. Creation is continuously dying and through that death is being created anew. I don’t like this process. It’s agonizing. Why does beauty lie in the broken?

Without peace, there is no, well…peace. This is not the 1960’s adaptation of freedom without consequence, which allows for temporary feelings of unattachment, through the lack of the burdens of fulfilling healthy relationships and the responsibility to my state in life. Lasting peace is not found there – as we, as a society have come to realize generations later.

The philosophy of lasting peace had been taught to us by its master; Jesus Christ, centuries ago. Yet, the message was just as confusing then as it is today.

“Unless a grain of wheat falls to the ground and dies, it remains just a grain of wheat; but if it dies, it produces much fruit” (Jn 12:24-26). Sure! I can relate to this, as long as we are talking about wheat. Having not been a farmer, I never knew the grain actually “died” to produce fruit. I just thought of it as growing – fulfilling its purpose as a grain.

I mean, what good is a grain of wheat if it only remains a grain? And…there it is!

There are many times when I prefer to remain a grain of wheat. Perhaps, in my apathy, I am even okay with being pushed aside and discarded with the other rotten grains. And it’s not the concept of producing good fruit that leaves me stagnant, but rather the obstacle of death that lies between my current state and my purpose.

Lord, why must we die?

A Lesson in Reality

When I was a young adult, I noticed that I gravitated toward the temporal – an urge fueled by envy that I fought ardently. I was captivated by center stage, and climbing the ladder toward recognition and fame. Yet, I prayed that the Lord, in his wisdom, would do what he willed for me, and not what I willed.

That prayer wound up being the best of prayers, and through the years, that part of me experienced a slow death. As it died, it cried out, and I thought that surely I was losing something of myself. It turns out that I lost a deadly sin!

Recently, I attended a conference, and on the last day I began to cry in confession – something I haven’t done in quite a while. The funniest thing is that what brought on the tears was a recognition of death and beauty.

You see, throughout the conference, I began to realize that I was constantly attracted to those behind the scenes, and not on center stage. I met a Franciscan Brother there, whose job was driving priests around from place to place. Some of the priests he drove around had gained quite a bit of popularity throughout the years. They were regulars on television, had authored books, and could be easily recognized by the public.

Yet, I was so drawn to the service of the Brother, who had spent many hours with these men, but had shared few words with them. He could not boast of many things, other than being in the constant presence of saints.

The Gift of Service

Service can also be a slow death at first, to one whose heart has not be taught to serve.

I was given a great gift by Lord in the form of a person, who had many needs – spanning all forms and conditions. My will constantly opposed the needs of this person, and I found charity a great cross, especially in moments when I was asked to sacrifice “very good desires” such as mass, for the sake of physically assisting this person.

I struggled with frustration and anger, and the human desire to cut-and-run. I didn’t want to die. Why was the Lord asking me to die?

A priest asked me to pray that I would see this person as God saw them – and I did. In only a matter of hours from uttering that prayer, this person confided in me a deep wound and a great loss they had suffered. I felt my heart break open, and out poured love.

I was a grain of wheat in this situation; reluctantly buried, reluctantly died, humbly resurrected in the fruit of charity.

There is a quote that I love from Ann Voskamp’s book; One Thousand Gifts:

I love it because it captures the sentiment of my heart – I am a broken thing, but I am afraid of being a broken thing. I resist death, even when the Father promises new life. My brokenness lies in control, which may be the opposite of what was sought after in the free-loving 60’s, but it produces the same end; fear, a lack of trust, and clinging to my life as a grain of wheat.

And the Lord says “Trust,”

And the Lord says, “Peace be with you.”

Peace I leave with you; my peace I give to you; not as the world gives do I give to you. Let not your hearts be troubled, neither let them be afraid.”

…and never be afraid of being a broken thing.