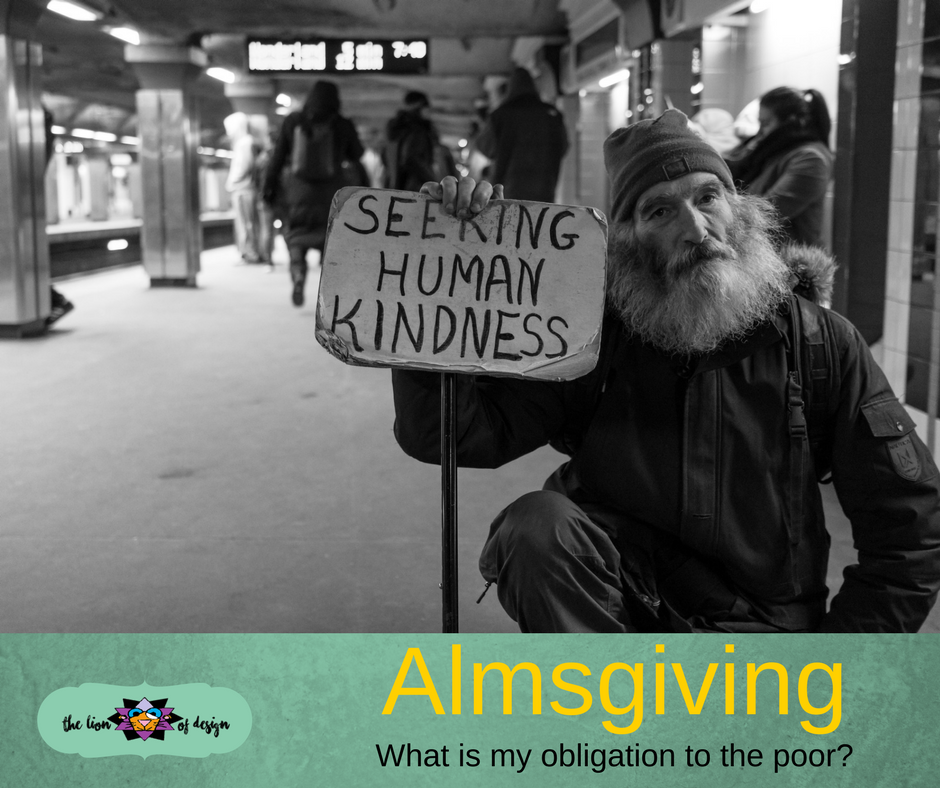 I used to dread the red light that stopped me at the busy intersection right next to a wearily downcast homeless person, holding a crumpled cardboard sign. I would try to read the dark sharpie letters written on the sign, out of the corner of my eye. I dared not to make eye contact, for fear of the dread and guilt it heaped upon me. Suddenly, I found myself self-consciously fumbling with trash in the car and the CD’s in my console – anything to avoid the emotional whirlpool that swept over me at that intersection.

My head was a scrambled steam of consciousness, reasoning through poverty and my obligations to the poor. I would reflect of my monetary donation to the Church and charity organizations, and consider the bad intentions this person might have with my $5.

Suddenly inside my head, I not only became a banker and parole officer, but a social worker as well. I assured myself that this person had ended up begging on the side of the road because of a series of bad choices, most likely stemming from severe mental health issues.

All the while, those empty pleading eyes were only separated from mine by a pane of glass in my driver side window and God’s oxygen between us.

What is my Obligation to the Poor?

As I became more and more agitated by these situations, I really did need to answer the question of “What is my obligation to the poor?” I knew that the Lord was allowing this to lay heavy on my heart, most likely for my own benefit and growth through the experience. So, I considered the root of my problem – that is, the element that inflicted the most guilt within me.

It was not so much the money or the begging that bothered me, but the fact that I felt I could not engage with this individual. The “social norm,” which taught me to roll up my window, lock my doors, and pretend this person was not two-feet away from me, potentially in a situation of desperation and great need that bothered me.

Now, I understand safety and I am not naive, and therefore I’m not suggesting to swing open your door and run out to hug the homeless man for the duration of the red light. But I am saying that refusing to even acknowledge another person’s existence is certainly not what we, as Christians, are called to do.

Perhaps you feel more comfortable handing over the granola bar from your lunch, or asking the man his name and offering a few hail Mary’s instead of money. Either way, it is ultimately the encounter with the man that counts – because there is no way to bring Jesus to others without an encounter.

If we have a “Jesus loves you” bumper sticker or a rosary hanging from our rear-view mirror, and can’t even offer a smile to a person in need – for fear of the guilt it will inflict upon us, than we are doing more harm then good by our contradictory behavior and Christian symbolism.

The Gift of Encounter

A dear friend of mine used to pull right up to the homeless person on the side of the road, roll her window way down and loudly greet them with a great big smile. She would offer some spare change and ask his or her name, assuring them that she would be praying for them and hoping that they had a wonderful day! Meanwhile, I would be sinking down in the passenger seat, trying to blend in with the upholstery, wondering what in the world she was doing. How did she know this person wasn’t going to rip her out of the car if she got too close, or at the very least spread lice?

The gift of my friend’s encounter – in recognizing the humanity of the other person, despite outward appearances, would not leave me. It inspired and transformed me. I wanted to see Christ in all, and be Christ for all.

I began to travel with a box of granola bars, and found great joy in the opportunity to share one with a person begging on the street. I smiled as I rolled my window (half-way) down and engaged in conversation, as I would with a friend. I did not want to feel like the benefactor of this person, but rather as a sister in Christ. Even if I had nothing, I would still smile and offer a prayer. I knew others took notice of my behavior, as I had previously taken notice of drivers around me, when I had been anxiously awaiting the agonizingly long red light.

Another piece of advice from a teaching colleague who happened to be Muslim, set the tone of the principle of charity regarding almsgiving. She said it wasn’t her concern what the person did with the money she gave in charity, only that she gave it – as she was called to do. We Christians are called to give freely to the poor from our excess, which most of us do greatly benefit. In return, God blesses us for our generosity, and only he judges the other, based on his or her stewardship of what is given.

We are not to take a communistic position on charity – dictating how the portion we give will be used, thus removing the freedom from both the gift and the reception. Rather, in charity there must be a detachment associated with the gift, in order that it may be true charity. If we are begrudgingly handing over a $1 bill, all the while mumbling under our breath how this drunkard will squander it, we have undone all that God has wished to pour out upon us and them in the encounter.

We are called to give freely, in love, detached from our excess and the others intentions with it. Love purifies both of us, filling us with more of Christ and less of ourselves.

The Catechism of the Catholic Church teaches us that “among all (works of mercy), giving alms to the poor is one of the chief witnesses to fraternal charity: it is also a work of justice pleasing to God.” CCC 2447

Recently, I came upon a man at an intersection that I stop at several times a day. I have never seen anyone at the intersection previously or since. I happened to have a $20 bill in my console, which I had found on the side of the road, and decided that I would share it with someone who needed it.

As I smiled and beckoned to the man, he slowly hobbled over. His white wiry hair was pulled back in a ponytail under his hat. As I handed the bill out of my window toward him, he stared unbelieving at it. He hesitated to take it as his eyes filled with tears. Finally, tucking his cardboard sign under his arm, he asked me very genuinely through a mouth of missing teeth if I was serious.

“Of course,” I said happily, “This is meant for you!” Taking the money, he just stood there weeping. He said quietly, “Thank you ma’am, I could be here all day and never see this much money.” I was filled with compassion for this man, and as he said, “God bless you, you don”t know what it means to me,” I realized that I really didn’t. I never would know what it meant to him – not in this lifetime anyway.

It’s true that I don’t know what the homeless person will do with my charity. I don’t know if they will use it for good or ill – but that doesn’t matter, because it’s not what God is asking of me.