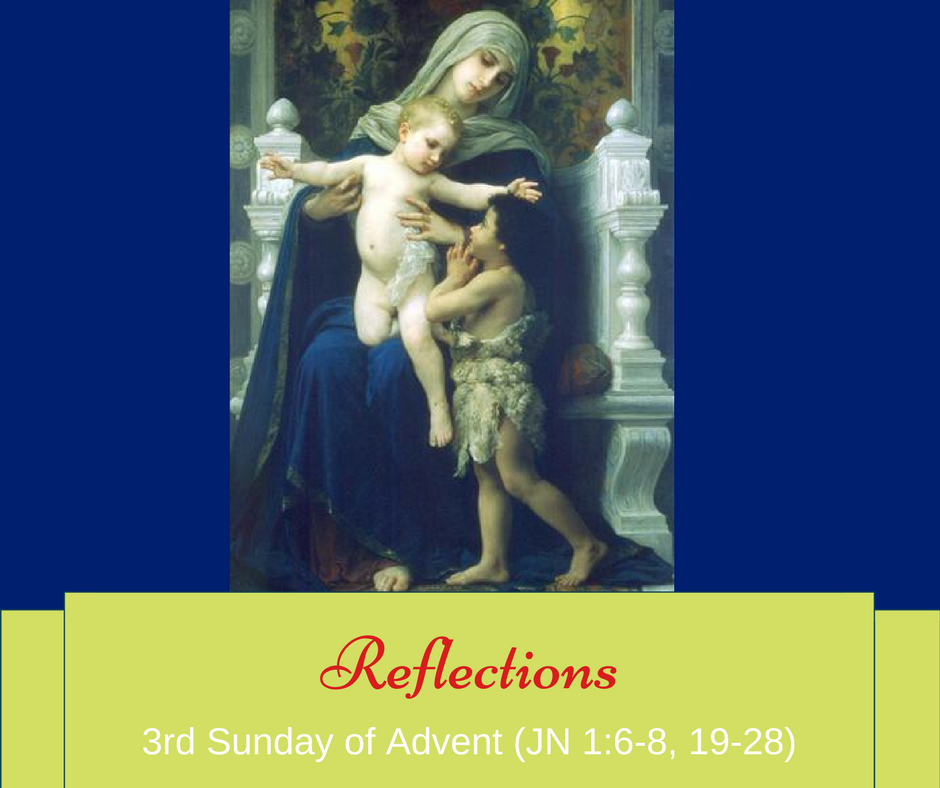 The Virgin, Jesus, and Saint John Baptist by William-Adolphe Bouguereau

Who Is John the Baptist?

Who is this man, who has a profound spirit of God, with which he exercises it in the desert, by calling on people to repent? The priests, Levites and Pharisees who are sent to John are all quick to question by whose authority he preaches this repentance.

Surely the Jewish people were awaiting the return of the prophet Elijah, who was carried up to heaven by a whirlwind and a chariot and horses of fire. The profit Malachi foretold the return of the great profit Elijah:

Behold, I will send you Eli′jah the prophet before the great and terrible day of the Lord comes. And he will turn the hearts of fathers to their children and the hearts of children to their fathers, lest I come and smite the land with a curse.” ~Malachi 4:5-6

But John says he is not Elijah.

The Jews were also waiting for the prophet, like Moses, who was foretold to rise up from among them:

The Lord your God will raise up for you a prophet like me from among you, from your brethren—him you shall heed” ~Deuteronomy 18:15

But John says he is not Moses.

John is not Elijah, not Moses, and he clearly stated, “I am not the Christ.” This perplexes the Jews, as John is sent by God, but is not God. In this time of expectation, who is this rouge preaching outside of the synagogue?

A voice cries:
“In the wilderness prepare the way of the Lord,
make straight in the desert a highway for our God.

John answers the question as to his identity, with this verse from Isaiah. In John 1:23, he says to them:

I am the voice of one crying in the wilderness, ‘Make straight the way of the Lord,’ as the prophet Isaiah said.”

The gospel of John tells us that John the Baptist was sent from God. His mission was to testify to the coming of Christ, so that others might believe through John. He was to prepare the way for the coming Messiah, as all the prophets did before him. This mission was one that was prepared for John, and foretold before his very birth.

When John’s father Zechariah entered the temple to burn incense, the angel Gabriel appeared before him (the same angel who appeared to Mary), prophesying John’s birth:

Do not be afraid, Zechari′ah, for your prayer is heard, and your wife Elizabeth will bear you a son, and you shall call his name John.

14 And you will have joy and gladness,
and many will rejoice at his birth;
15 for he will be great before the Lord,
and he shall drink no wine nor strong drink,
and he will be filled with the Holy Spirit,
even from his mother’s womb.
16 And he will turn many of the sons of Israel to the Lord their God,
17 and he will go before him in the spirit and power of Eli′jah,
to turn the hearts of the fathers to the children,
and the disobedient to the wisdom of the just,
to make ready for the Lord a people prepared.”

John said to those who came to question him, that “there is one among you whom you do not recognize.” This was to say that they Messiah was already among the Jewish people, but the wise and learned ones could not recognize him.

But John did indeed recognize Jesus when he came to him, even though he said he did not know him. John proclaimed to those who had come to him to be baptized:

How did John know Jesus when he came? John tells us:

I saw the Spirit descend as a dove from heaven, and it remained on him. ~John 1:32

This was not the first time John recognized Jesus through the power of the Holy Spirit. For this miracle happened even before John was born.

When Mary visited her cousin Elizabeth, who was pregnant with John, two things happened at the sound of Mary’s voice. First, John leaped for joy, and second; Elizabeth was filled with the Holy Spirit.

And when Elizabeth heard the greeting of Mary, the babe leaped in her womb; and Elizabeth was filled with the Holy Spirit ~Luke 1:41

For behold, when the voice of your greeting came to my ears, the babe in my womb leaped for joy. ~Luke 1:44