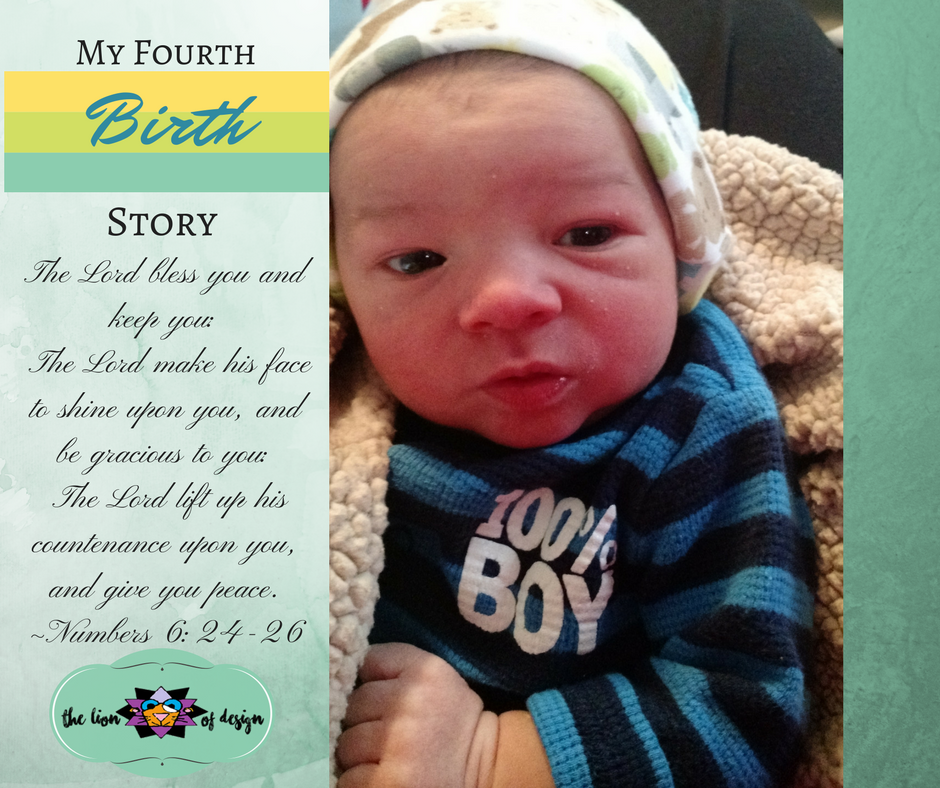 I was always one of those people who wondered how in the world a woman could be so caught off guard by the birth of her child that she could accidentally deliver in a car, bathroom, or elevator. I mean, how could a woman be so out of tune with her body that she’s not aware she is in labor?

Well…now on baby four, I know!

Labor is a crazy thing, there’s nothing else to be said about it. Our bodies know what they’re doing instinctively in that department, and sometimes they do a little bit too much of it on their own.

My husband has always been just as enthusiastic about home birth as me, but the one thing he asked was that I never make him the first string quarterback. He will assist all day long, in any way needed…as long as he is along side a professional. So what happened? How did this happen to me? How did my husband catch the baby – unassisted?

If you read my previous three birth stories (#1, #2, #3), then you know they each had a drama unto itself, but all-in-all they were quick and predictable. There was no pre-labor or Braxton Hicks – when contractions started, they were the “real deal” and there was no slowing them down. So, I had gotten accustomed to this pattern of laboring. Contractions would start almost suddenly and continue to climb incrementally until we had a baby a few hours later. There was always at least a few hours!

This time however, everything was off. For the first time I went past my due date – only by two days, but still enough to throw the first curve ball. Next, I began to experience contractions that stopped and started over the course of a few days. I learned this was called prodromal labor – a term that was entirely new to me. Researching this term gave me no relief, as it seemed women experienced this for days or even weeks before the onset of actual labor. I determined that my prodromal labor wasn’t actually doing any of the work of preparing my body for baby – it was just indicating I would go into labor…eventually.

By the third day of this, I was exhausted and had had enough. I called my mom to come help out for the day, and I am so thankful I did. That night as the kids were tucked into bed and my husband and I made our way to our own bed, the contractions began to become a little more intense. We tried to begin timing them, but they were jumping all over the place. I mentioned that we may want to let the midwife know about this change, to which my husband said we would wait for the next contraction, so we would have one more data point.

The next contraction was me turning to him and saying, “He’s coming!” My husband just looked at me nonchalantly and said, “Who’s coming?” When I screamed “The baby,” the next few moments quickly turned into a made-for-television comedy. He jumped out of bed, not realizing his feet were tucked under the covers, and landed flat on the floor next to the bed. He then scrambled to the wall without his glasses to fumble for the light switch.

In the meantime, my mom came upstairs to see which one of the kids fell out of the bed. I screamed for her to come into the room and when she did she was in total shock to see me moments away from delivering the baby, considering that no one knew I had even begun labor. My husband fumbled with his phone and then threw it at my mom and instructed her to call the midwife. She looked at him like he was crazy, as his phone has a security code to unlock and makes her flip phone look prehistoric.

Finally managing to call the midwife, he somehow composed himself enough to exchange pleasantries. To this, I screamed, “Just tell her the baby’s coming!” Even though the phone wasn’t on speaker, I could hear the midwife shriek, “What” all the way across the room. There wasn’t much more time to think after that, as the baby was not waiting for any of us to be born.

The whole labor was certainly under a half hour, and not at all as we expected. My mom and husband were my birth team and caught our baby! Thankfully everything was normal and without complications. There had been no timing contractions, no transition, and I guess as close to sneezing and having a baby as you could hope for.  I had been begging my heavenly friends for a quick and relatively painless labor. I think they may have been overly-generous (at least if you ask my husband)!

I have gone into great detail in my past birth stories regarding my experience with postpartum depression, and the incredible results I have had taking progesterone, recommended by Dr. Hillgers of the Pope Paul VI Institute.

Given its effectiveness in my last postpartum, I had a prescription filled long before my due date. It was my personal arsenal of mental health first aid! The evening after I delivered I began taking progesterone, and cruised through the first few weeks after baby without the slightest sign of baby blues. What a gift to mothers!