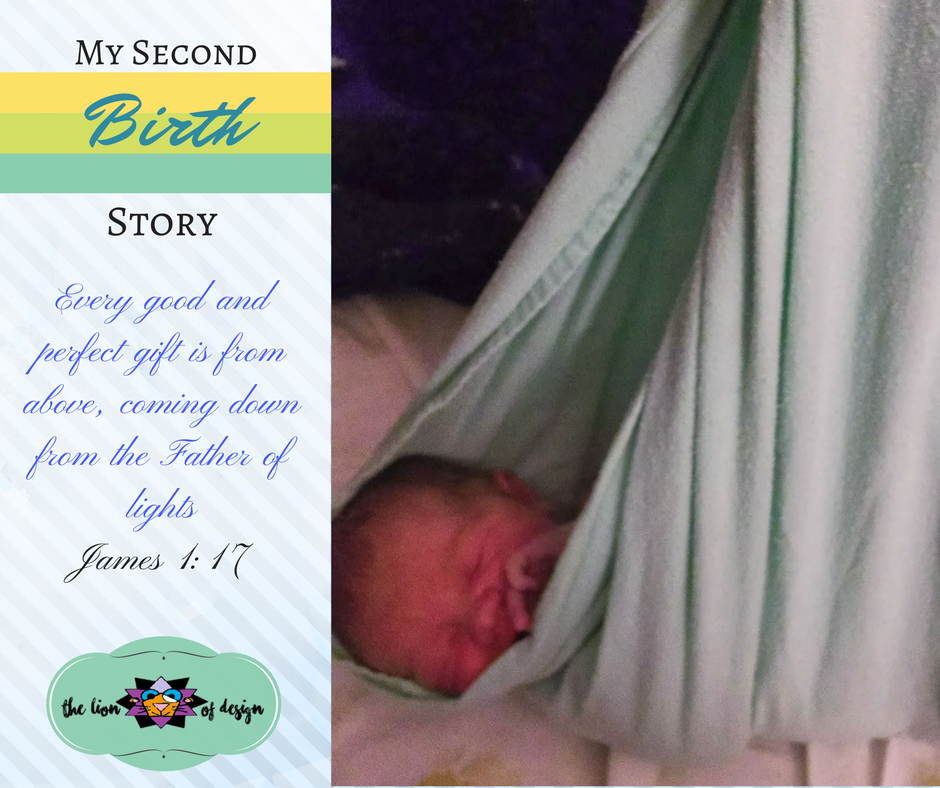 Another punctual little boy! Both of our sons decided to come as scheduled – right on their due dates. This was despite constant assurances that a due date baby was rare, and with little to no warning signs throughout the day of the onset of labor. This particular little one waited until dinnertime to begin making himself known. Here is Birth Story #2!

If you read Birth Story #1, then you know that my first labor was a fast and furious 8 hours! It came without warning at midnight, and progressed quickly from there. Given that it was my first birth, and I had chosen a natural, out of hospital birth with a midwife, I had no idea what to expect as far as pain. I had prepared as best I could – squatting whenever possible and running through the birth a million times in my head. Rosary beads began to get worn out as the unknown imminently drew nearer. Still, nothing could quite prepare me for that first birth.

After the birth – when the unknown was known, there was a LOT more anxiety the second time around. This time I knew what to expect…I dreaded it! I cringed at the thought of the upcoming physical pain, and I began to mentally give in to my fear and doubts.
Although every mom and birth coach will advise expectant mothers not to read birth stories on the internet, I couldn’t help but allow my sleepless nights to go there. I needed to seek out some comfort in the stories of second-time births, especially in the weeks leading up to mine. To my great relief, it seemed that nearly all the second-time moms had reassuring stories of significantly easier and faster labors with baby #2. I read and re-read their birth stories, clinging to the reassurance that my first 8-hour labor might be cut in half.

My January due date seemed to be passing by uneventfully. It was my husband’s birthday and there was a predicted blizzard the following day, so we were laying low at home. There was certainly a nervous tension due to the bad weather on the horizon, particularly for our birth team.
As we sat down to dinner with our toddler, I began to feel a little uncomfortable and suddenly on edge. I was becoming annoyed easily, distracted, and my patience was almost non-existent. Instead of laughing, I specifically remember my frustration when my son flung his chicken at me and it landed in my drink.
As dinner continued, so did my mild contractions. Mind you, these were nothing like the contractions I remembered experiencing in my first labor. Instead, these were few and far between; occurring about every 20 minutes. I was also able to talk and laugh between them, which I certainly wasn’t doing the first time around.
Because of the big snow storm expected, I decided to give my mom and midwife a heads-up about the contractions. I assumed we might be having a blizzard baby the following day and knew they needed to plan ahead. Thankfully, they both decided to head over to our house right away, despite my hesitation.

I’m so thankful for their quick decision to come over, because in a very short time my contractions had gotten stronger and more frequent. In fact, in the time it took for them to get to our house, labor had progressed dramatically!
I couldn’t believe how different this labor was from my first. As I sat downstairs on the couch making jokes and telling everyone not to rush over, fully convinced we were still a long way off from baby’s arrival, he was actually only a few short hours away. I was waiting for a repeat of my last labor – waiting to enter the “twilight” zone and for the crippling pain that never came.

Over the course of the next hour, contractions picked up and eventually got more painful. I headed upstairs to lie down in bed just as my mom and midwife arrived. This time I was fully present mentally. I remember the Pandora station and how it reminded me of the soundtrack of a Chinese restaurant. I remember how quiet and still the house was. And then I remember pushing with all my might to get him out!
This kid was not messing around – he was ready to greet the world right away! I could only imagine a scene from a movie – the way the birth team described him shooting out with such force and almost slipping through their fingers. True to the stories I had read on the internet about second births, my labor time had been cut in half. The whole awesome experience took place in under 4 hours total – from my first contractions at dinner, to holding my little son in my arms!

My second labor and delivery was also much less drawn out and dramatic. Within the first half hour after he was born, those of us in the room resumed talking and joking like nothing major had happened. We took pictures, brought his brother and Gram in to meet him, and rejoiced that he came before the storm.
I was shocked at how much easier I could move around this time and how much faster I was recovering. Thank God for muscle memory! Motherhood is truly an awesome gift, and I am reminded with each labor that my body was specially designed and created to birth my children.

Despite my joy in the wake of our second beautiful baby boy, I didn’t understand why I couldn’t stop crying. This certainly wasn’t what my postpartum had looked like the first time.

Suddenly I was in a nightmare, in which I was transported back to my hormonal teenage self. I couldn’t make it a half our without bursting out in tears for no reason at all. All commercials might as well have been written by Hallmark, everyone was my best friend, and I became too much for even myself to handle. What in the world had gotten into me? Was this the new me? Would I have to live like this for the rest of my life?

Thankfully not. Unfortunately, I din’t recognize this as postpartum depression right away, or if I did, I figured it was temporary and passing as my body readjusted hormonally.

Three months later I was learning how to cope but certainly wasn’t thriving, and I just didn’t feel quite like myself. In fact, I felt very nervous and unconfident. I went back to my OB/GYN and was given progesterone, which was a game changer!

What I learned was that my body was being supplied with a high level of progesterone throughout pregnancy, which “enhances the function of serotonin receptors in the brain.” This “feel-good” hormone was supplied by the placenta, and after delivery my body experienced a stark depletion.

-Friends: It’s funny how people assume you want to be alone for several weeks after you have a baby. Perhaps it’s the old tradition of not taking the baby out of the house before baptism for fear of germs, or our cultural guilt of intruding. Either way, I was desperate for friends to come visit me.

I remember one friend without children bringing a meal to us and remaining about a foot from the front door for a total of five minutes. She then pushed the bag of food toward us and ran out of the house like we had the plague, or babies were contagious.

Sadly, other kind-hearted strangers who brought us a meal got cornered in our kitchen by this postpartum crazy lady, who talked their ear off in the midst of bouts of crying. We never did see them again.

I just needed people to listen, understand, offer advice, and give me company and support.

-Progesterone: As I said before, hormones are crazy! They can truly make us feel and act differently than we normally would. Pregnancy is one of the most hormonally altering experiences and it seems more ridiculous to imagine that we would go right back to normal after delivery, rather than needing supplemental support. Between thyroid, vitamin, blood-sugar, and hormonal deficiencies, pregnancy should be treated more as a marathon recovery than a 20-minute treadmill run.